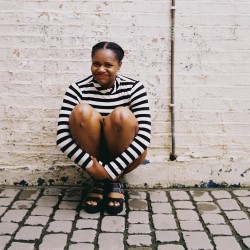 “I’m half Scottish and so my Dad took my when I was very little to just walk amongst the buzz the fringe creates, and then when I got older, I went a few times as a ‘gals trip’ with my mum. It’s such a great festival; the perfect mix of chaotic and focused.”

WHAT: “Patricia has spent a year crafting a kick-ass speech while recovering from an abusive relationship. But when she bumps into her ex on the street, and accidentally agrees to dinner with him that night, she’s got some big decisions to make; what to wear? What to say? And whether or not to go? Join Patricia as she gets ready for the date, tells stories of her past and how it has affected her present, and looks honestly at her future.”

It is! I’ve been before as an attendee, but not as part of a show. I’m half Scottish and so my Dad took my when I was very little to just walk amongst the buzz the fringe creates, and then when I got older, I went a few times as a ‘gals trip’ with my mum. It’s such a great festival; the perfect mix of chaotic and focused.

That your priorities are never what you think they are. Oddly I have found that in a rather painful way, the numerous lockdowns and the entire pandemic has helped me take pressure off myself creatively. Over the past eighteen months I’ve been so occupied, thinking about my family and well-being, that when I returned to writing it felt so much more like a choice, rather than an obligation.

So Patricia Gets Ready (for a date with the man that used to hit her) is a one hour, one woman show that follows Patricia getting ready in her bedroom, after accidentally agreeing to dinner with her ex that night. It’s a funny, heart breaking, and honest hour with a genuinely likeable woman who’s trying to understand herself a little better. Initially it ran at the above pub theatre in Kenington; The White Bear; and it transferred from their to the VAULTS festival in 2020. We snuck our run in just before the first lockdown which is sort of insane?

We have the wonder team behind it. Patricia has always felt like a culmination of all the right people at just the right time; written by Martha Watson Allpress, directed by Kaleya Baxe, performed by Angelina Chudi, produced by Nur Khairiyah and the tech is done by Steven Frost. It’s a small team for an intimate show, and everyone handles the piece, and each other, with real delicacy and care. Our team’s created something really special.

After the fringe, the hope is the show gets the opportunity to tour; I think taking this specific story to different areas will be so fascinating, as it’ll resonate different everywhere. It’s always exciting to think of the conversations that happen after the curtain call, and these’ll be so different and unique to each place. The more chat the better!

Oh my gosh! There’s so much incredible stuff to be seen, and the Pleasance’s line up kind of floored me with excitement. But honestly, I think walk the Royal Mile, find a poster that looks vaguely interesting but you have no idea what the show is or about, and GO SEE THAT. Surprise yourself. It’s always fun!