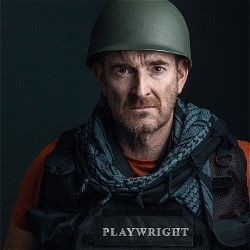 “I think I probably started coming here back in the 1830s when George IV was still King.”

WHAT: “In 2002, whilst researching a comedy, triple-Fringe First winner Henry Naylor and two-time Scottish Press Photographer of the Year Sam Maynard, went to the Afghan war zone. An extraordinary tale ensued in which they were threatened by a war criminal, captured by the Mujahideen and nearly blown up by the Taliban. Performed by Naylor himself, the show takes us back to the start of the modern Afghan tragedy. It comes direct from the Adelaide Fringe, where it won twelve five-star reviews and two major awards. European Premiere.”

Aag. I’ve lost count of how many times I’ve been to the Edinburgh fringe; I think I probably started coming here back in the 1830s when George IV was still King. No, seriously, this is probably my 20th year. I started out doing comedy sketch shows with my buddy Andy Parsons; but in more recent years have been a playwright. I’ve certainly done seven plays in the last eight fringes.

I tend to do the same venue every year, at the same time-slot – so people know where to find me! (The Gilded Balloon Teviot Dining Room at 4pm). I know the room well and know how to make it work. It’s also nice to keep returning to the same space: like coming home.

Every year feels different, depending on how your show is going down. On those magic years when your show is a hit, there’s nothing better on Earth.

I think for many artists, we’ve been stuck in our houses, unable to socialise, and it’s forced us to be introspective. I expect there to be a lot more shows this year where the performers are mining themselves. Digging deep into their characters.

So I guess the work will be more introspective than usual… but that can produce interesting Art. If creatives have mined themselves honestly, they could have tapped a greater profoundity.

Also, many of us have been spending two years to come up with the shows. That’s a lot of time in the development of an artist. Expect quite a few artists to have taken dramatic twists in their style. I’m anticipating surprises from the more established acts this year.

For my part I have returned to performing. I’ve only performed in one show in the last 15 years at the Fringe. This year I’m doing my first-ever solo show. And I’m loving it.

My show is called Afghanistan Is Not Funny. For an hour, I tell the story of my, and my brilliantly talented photographer friend Sam Maynard’s, trip to Afghanistan straight after the war in 2002.

We were researching a play I was writing for the Fringe at the time, called Finding Bin Laden. We were completely naïve. We turned up in a war zone taking photos and meeting all sorts of Afghans, refugees, landmine-victims, warlords, soldiers, Ex-Talibanis.,, We nearly got killed a couple of times, we narrowly missed a landmine, we were threatened with execution by a war criminal… we were even kidnapped by the mujahedin… And we have the photographic evidence of Sam’s brilliant photographic slides to back up the story.

I’m excited about it; previews at the Adelaide and Hollywood Fringes went well. We won a Best Theatre award at Adelaide, and Best International Act at Hollywood fringe. So it should be good!

Torch Theatre’s multi-award winning show called Grav is returning to the Fringe. It’s about Welsh rugby legend Ray Gravell, and was a big hit a few years ago. You don’t have to be a rugby fan to enjoy it, though, and the actor Gareth Bale, is a real talent. Should be great.

Torch Theatre is doing its version of one of my plays ‘Angel.’ The show won the Fringe First back in 2016, and I’m told that theirs is an excellent production. The actress Yasemin Özdemir is meant to be extraordinary in it. I’d love to be able to see it – but the show’s on at 4pm – which is the same time as me!

Stand-up Marcus Birdman will be doing a show about how he had a stroke. He’s always a really interesting performer anyway, but I think his subject matter this year will be particularly challenging and interesting.

And finally, one of my good friends, Mike Blaha is performing his first ever Edinburgh show. It’s a spoof academic lecture called, “Spanking The Monkey: The Etymology of Onanistic Euphemisms.” He’s a very eloquent and intelligent guy – so heaven knows what he’s come up with!!