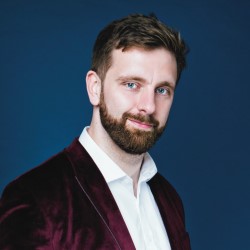 “Even in a global pandemic, no one ever really quits comedy.”

WHAT: “Before the plague and WW3 I was a chortling, apple-cheeked blacksmith and now I am a scowling wretch in a tattered cloak. The show is observational comedy for people who think they don’t like observational comedy. A mixture of high-brow and low-brow references from five-star receiving, award-winning, hit-podcasting, Frank Skinner-supporting Pierre Novellie.”

It’s my 12th Edinburgh Fringe and my seventh solo hour of stand up. I have almost lived a year of summers inside the Fringe and my only year off since I was 18 was the covid year. It’s huge and mind-bending and amazing but also lonely and expensive and stressful.

The amount of effort expended on getting a show ready for the fringe is equivalent to writing a full novel, a one hour pilot script and several pitches, minimum. Even in a global pandemic, no one ever really quits comedy. Some opportunities will never come back so they are best embraced when they appear.

I’m a stand up comedian so I wrote it and I’m in it. My producer is the great writer/producer Katie Storey. I’ve been previewing it and fiddling it for months and months and ideally it will do a London run and maybe some one-night performances around the country, who knows.