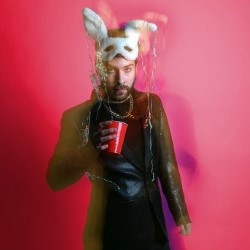 “My last shows were a look back Afterparty is a look at now.”

WHAT: “Richard Stott returns to the Fringe with a brand-new show filled with trademark storytelling and joyously acerbic one liners. The runner-up in Dave’s Jokes of the Fringe 2019 talks about stripping down for a documentary, club nights that turned into afterparties and then into crime scenes, and finally starting to grow up and beginning to like the adult he’s become. All while living with a disability… perhaps. As seen on ITV2’s Stand Up Sketch Show.”

This is going to be my third fringe! I honestly tried to run before I could walk with my first one in 2017, I’d only been doing stand up for a matter of months but felt confident enough to bring a 45 min show called Wretched to it. It had it’s highs and lows but I reckon that first run did the ground work for everything else.

2019 was my real debut and I had a great time and surprised myself by nabbing runner up in Dave’s Jokes of the Fringe. Now I’m back with a second hour called Afterparty, a comedy about growing up, feeling your age etc. I’ve missed the fringe, for me it’s a special place that anyone can put on almost anything, you can be watching a TV star one hour then hopping across the road to see your friend you did open mics with. We have to make sure we keep it that way.

Perhaps a lot of them are in the show itself so maybe I shouldn’t give them away. The years between 2019 and now just feel like a fever dream. Now this hasn’t got anything to do with the pandemic but the big thing I’m learning is how to write in the present. My last shows were a look back Afterparty is a look at now. It’s been a long process to get feeling comfortable forming the ideas. I’m pretty proud of where i’ve got to with it.

Afterparty is written and performed by myself and directed by Kevin Shepherd. I also have the help of production team Andrew Roach Talent and Ingenious Fools who’ve been essential in getting the production off the ground.

It’s premiering at Edinburgh and afterwards I hope to develop it more and get some theatre bookings.

There’s so many people I could mention here but you can’t fail to have a good time at whatever Sooz Kempner is doing. Her show is called Playstation I believe, I don’t know what it’s about but it doesn’t matter, she don’t miss.