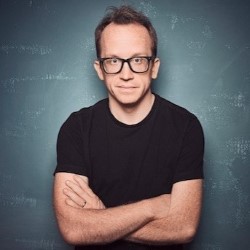 “The show deals a lot with the idea of redefining fatherhood, manhood, masculinity, all via the responsibility of raising the next generation.”

WHAT: “The ‘New York comedy institution’ (New York Times) and host of the Beautiful/Anonymous podcast makes a much-anticipated return to Edinburgh following a six-year absence. Join Chris (The Chris Gethard Show, Parks and Recreation, The Office) as he follows up his universally critically acclaimed 2016 residency with a brand-new stand-up hour.”

I performed as part of Edinburgh Fringe back in 2016. The festival blew me away. It was difficult, overwhelming, and daunting – but it was also thrilling to be around so many artists trying things, experimenting, and challenging themselves. I knew then that there was no better place in the world to try out risky material and to get it as good as possible.

Mostly, these past few years have just been a firm reminder to be grateful that I get to do this. Making things and connecting with people – it’s a good life. I’m lucky to live it. I’ve always known that. These past three years have made it that much clearer.

I wrote the show. It started out as stand up material, but the more I wrote about what it’s been like to become a father in 2022, the more I started considering what it must have been like for my dad to be a father in 1980. A lot of things started to make more sense. A lot of stories I’d forgotten came back, and I went back and filled in the blanks on those. The show deals a lot with the idea of redefining fatherhood, manhood, masculinity, all via the responsibility of raising the next generation. I’ve been touring the show around the states for a while and I’m glad that Broken Robot and So Comedy are helping to mount it at the Gilded Balloon.

My friend Anthony DeVito has a fantastic show about finding out who his deceased dad was in life. It’s incredible and hilarious.