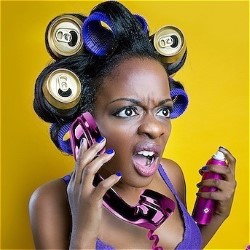 “Having gone to the Fringe for many years prior to now performing, I have a sense of what audiences expect, what keeps them engaged and what can really stand out in a sea of posters that get lost amongst the noise.”

WHAT: “Ever wondered what takes a girl so long to get ready on a night out? It’s Saturday night, the big girls’ night out and this girl is trying to get ready on time. Unfortunately, people won’t stop interrupting her. Delve into her world as she figures out what to wear, how to do her hair and what to do when she gets there. Uncensored, dishevelled and sincere, this is the internal conflict of a woman trying to achieve modern ideals and aspirations, in an hour of character comedy from award winner Eme Essien.”

I have been going to the Fringe for years as an audience member. It is an experience like no other and I love the experience. There are a lot of shows to filter through and the experience can be quite overwhelming, particularly as I am a solo traveller. I think that what is so unique about Ed Fringe is the mix of seasoned artists and performers and newcomers who are showcasing new material and everything in between. All this within walking distance (mostly) and every year, I found a gem that would get me super fired up and eager to showcase my own work. I really love how engaged the audiences are and for the most part, they are truly willing you to succeed and ready to be entertained.

Having gone to the Fringe for many years prior to now performing, I have a sense of what audiences expect, what keeps them engaged and what can really stand out in a sea of posters that get lost amongst the noise.

Wheeew that was a year for me! It was a lot. I had so many unexpected things thrown my way around the time of my solo sketch show, ‘You’re Definitely invited.’ I really came out of it feeling so empowered battling through my anxiety condition and learning not to take myself so seriously. I am a classic overthinker and perfectionist and so letting those habits go and just doing, trying, experimenting has been a joy this time around.

‘Flat Shoes in the Club??’ is a comedy theatre show watching this “Girl” get ready for this big night out. There is dance and music and a lot of high energy but also a real sense of intimacy in that you are watching a young woman in her private space with all her thoughts uncensored. Told through the voice of a young Black woman, it’s a bit silly, a bit deep and just generally upbeat.

The show is written and completely self-produced by me. I did an earlier work in progress back in 2016 and so this is it all fleshed out. I hope to tour it after Edinburgh and have some plans for some screen content as well!

Go and see “Soulful Magic” by Magical Bones @ The Assembly. The show is going to be sick! He is an extraordinary talent and engaging Magician with great Hip Hop flair. He is also my brother and did not pay me to say this!