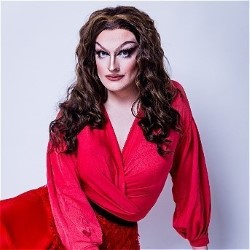 “I wrote the show in 2019, mere days before I was set to perform it in my hometown at the Buxton Fringe (I work best under pressure!).”

WHAT: “Kate Butch, the Comic Sans of Drag, is back in Edinburgh. She’s written a musical based on the songs of her favourite singer and namesake, but needs your help to get BUSH! to Broadway. The lovechild between Mamma Mia and a nervous breakdown, join this ‘great comedian’ (WhatsOnStage.com) for a hilarious blend of live music, lip-sync extravaganzas, and more cloud-busting than you can shake a stick at.”

The last time I came to Edinburgh was in 2018 with a sweaty, raucous club night called Lip-Sync Lollapalooza which ran until about 4am every night. I think that’s part of what makes a great festival: swapping sleep for total immersion in arts, performance, nonsense and finding glitter in all the wrong places.

I’ve learnt that anything and everything can disappear overnight, so to take every opportunity I can and throw myself into them. I was all set to take my show to Edinburgh in 2020 and had arranged the venue, the marketing, everything. However, being forced to wait until 2022 has meant that Kate Bush has come back in a big way, which has done wonders for my show! I suppose that’s another lesson : look for the silver lining in everything.

My show, Wuthering Shites, came about because so many people were confused (some outraged) that a drag queen called Kate Butch did very little Kate Bush material. I wanted to make the most Kate Bush show possible, with all the classics, plus some deep dives and niche facts, and how all of this weaves in and out of my own life. The show takes the form of the first ever workshop of my brand new Broadway-bound jukebox musical ‘BUSH!’, as I take the audience through the plot, the casting and even the merchandise; imagine Mamma Mia! crossed with a nervous breakdown.

I wrote the show in 2019, mere days before I was set to perform it in my hometown at the Buxton Fringe (I work best under pressure!). By some miracle I won the award for Best Comedy, and presented a slightly reworked version of the show at VAULT Festival in March 2020, but played to very empty houses due to some mystery bug that was going around. This summer marks the first time I’ve performed the show in two and a half years (I think I can remember it all), so it’s gone through some changes but stills retains the original spirit: a silly, theatrical celebration of Kate Bush and all her eccentricity.

I’m doing another show right after Wuthering Shites, playing the very challenging role of Kate Butch in Drag Queens vs Zombies. If you can’t handle more than one dose of me (I completely understand), I would recommend drag legend Séayoncé for spooky campery, comedy icons Sikisa and Katie Pritchard (you’ll be seeing their names a lot in the future), and the shows Any Suggestions Doctor and The Silliad for all your nerdy improv needs.