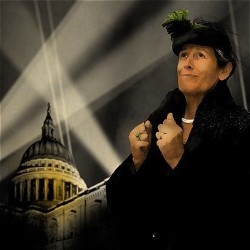 “The Fringe is special because it’s in beautiful atmospheric Edinburgh; it offers an amazing range of global live performance, it’s been at it for a few years, and there’s always a mood of celebration and kindliness, I’ve found, which makes it about coming together and celebrating talent, and difference.”

WHAT: “Returning to Edinburgh following a near sell-out 2016 Assembly season, Alison Skilbeck’s critically acclaimed one-woman show reveals the public and private life of one of the most extraordinary women of the 20th Century, Eleanor Roosevelt, from her daring trip to wartime Britain to her unconventional partnership with President Roosevelt. Granted special permission to use Eleanor’s diary and daily newspaper columns, this is the story of a passionate humanitarian, a woman beset by deep personal insecurities and tragedy, but one who never lost her passionate belief in the strength of the human spirit.”

No. I was first here as a student in the Oxford Revue, in 1967. Then not until 2008 for just a week with my first show ARE THERE MORE OF YOU, then I and the wonderful Jacqui brought that show again in 2011, then Mrs Roosevelt in 2016 ( near sell out!) then THE POWER BEHIND THECRONE in 2017, celebrating Shakespeare’s older women, then in 2018 ARE THERE MORE OF YOU again, a very very near sell-out! The Fringe is special because it’s in beautiful atmospheric Edinburgh; it offers an amazing range of global live performance, it’s been at it for a few years, and there’s always a mood of celebration and kindliness, I’ve found, which makes it about coming together and celebrating talent, and difference. These are the qualities that make for a great festival – taking time to experience it all being curious, being surprised, being afraid in a good challenging way.

Since 2019 and the lockdown I’ve learnt how crucial live performance is to our human health. We need it. We need same time, same place communication, communion, and are poor without it. I just premiered a new show ( set during the pandemic) at the Buxton Festival, and the feeling of sharing something again was wonderful. I’ve also learnt to keep at the creativity, and have written two shows. I’ve learnt that as an artist , as an actress, you have to find ways to practise in the way painters and musicians do. I teach actors and non-actors, but most of all I develop my own stuff. I suppose it’s never give up, and don’t take ‘no’ for an answer. No idea if this is what ‘you’ wanted?!

After my first show pure imagination – I wanted to write about someone famous, and it had to be someone I sympathised with. Eleanor Roosevelt, life long campaigner for peace, democracy, and human rights equality, was the one. I researched and wrote at the British Library, visited the Roosevelt Library in the US and was much helped, got permission to use her writings from her grand-daughter, and premiered it at the RADA festival in 2013. My wonderful producer Jacqui garbett of Hint of Lime ever at the helm. I toured Ireland, had a run at the king’s Head in 2015 with discussions after with Dame Helena Kennedy among others, and then brought it to Edinburgh in 2016 for its near sell-out run. I’ve toured the UK and also taken it to France. No idea where it might go after this time… It’s not all serious; tells her life story through her trip to London in 1942, and I play a total of 27 characters, some very funny, like the posh Mrs Egereton Warburton of the Cheshire WVS.

I’m sure there’s loads I don’t yet know about but friends shows, well, do see SPOONS at Gilded Balloon, MULAN and WAR OF THE WORLDS at same venue; HANDS AND FLOWERS by some terrific Oxford students, are Surgeons Hall, and BLOODY DIFFICULT WOMEN at Assembly. Oh and the one woman THIS IS PARADISE at Traverse.