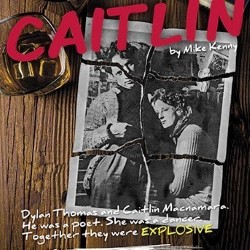 “I lost my mother to Covid in December 2020 and suffered all that went with losing someone precious at that time. So I decided to say “YES” more. Don’t be afraid. Take risks. Do a one woman show and make my Edinburgh debut at 56. That’s what I have learnt.”

WHAT: “Before Dylan Thomas died at the tender age of 39, he and his bohemian wife, Caitlin, binged and brawled their way round the bars of Britain in the 1930s and 40s. In this one woman show, Caitlin Macnamara tells the story in her own brutally honest words about her stormy, skint, passionate, booze-fuelled, infidelity-riddled marriage to the selfish, tragic genius and of her own unfulfilled ambitions. ‘He had his poetry. He was a poet. You will have heard of him. And Caitlin Macnamara? Chances are if you’ve heard of me, it’s because I married him.’”

This is my first time as a performer at Edinburgh fringe. I have been before as a punter and also as a reviewer but this is my first time on stage in Edinburgh and I am thrilled to be part of the 75th anniversary festivities. I’m looking forward to seeing as many of the shows at Greenside Venues as I can as well as catching some of my favourite comedy acts. I’m also looking forward to hopefully meeting up with people I haven’t seen for years to let them know I am still alive and still doing it. I have just finished a run at Brighton fringe festival so I’m hoping I get similar support from audiences in Edinburgh.

I think my appreciation of everything has been amplified since 2019. Being with my family, meeting friends, going out for meals, going to the theatre, going to live gigs are all wondrous to me now but also being in the small moments more and constantly thanking the universe for where we are and not where we have been for the last two years. I hope we never have to go back. I lost my mother to Covid in December 2020 and suffered all that went with losing someone precious at that time. So I decided to say “YES” more. Don’t be afraid. Take risks. Do a one woman show and make my Edinburgh debut at 56. That’s what I have learnt. One great big sod it.

Caitlin is a one woman play about Dylan Thomas’s wife and her turbulent life with the poet, told entirely from her perspective with brutal honesty. It was written by Mike Kenny back in 2003. I saw my friend Helen Griffen in a reprised production in 2014 and thought at the time Caitlin was a part I’d love to have a crack at. My old friend from Carmarthen Youth Opera days, Steve Elias is directing it. Steve has been in 25 West End shows so he knows what he’s doing and he was also the choreographer and presenter on My Dancing Town. Caitlin was a dancer so Steve has me jumping around all over the place. There are normally bruises so I am predicting to be black and blue after performance no 12. We have been at Brighton fringe, Theatrau Sir Gar’s Glowyr and Ffwrnes theatres, and we’re at the London Welsh Centre and Blackwood Miners Institute in October. And Edinburgh of course.

You have to go and see Siblings as they are hilarious and when I saw them in Brighton (again!) recently they had another act with them- Sami. He’s got his own show in Edinburgh and he’s also incredibly funny. If clowning and physical comedy are your thing you should definitely go and if it’s not- check it out anyway. I predict you’ll be howling with laughter.