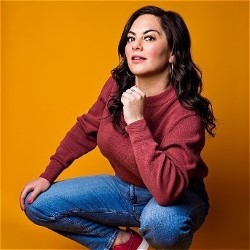 “I’m learning at the moment that selling a show is easier when the audience have less choice about what to see.”

WHAT: “British-Lebanese comedian Isabelle Farah’s sell-out Edinburgh Fringe 2021 show Ellipsis later transferred to the Soho Theatre and was listed by Chortle in the Top Ten shows of 2021. Isabelle returns with her debut stand-up hour about (not) growing up, terrible decisions and desperately failing to be a responsible adult. An ode to every irresponsible choice she’s ever made. ‘Promising newcomer’ (Telegraph). ‘Woke Millennial… very funny’ **** (Daily Mail). ‘Spellbinding’ **** (Chortle.co.uk). ‘Devastatingly funny’ **** (BritishTheatreGuide.info). As heard on BBC Woman’s Hour.”

No! I brought a show last year that was a theatre/comedy hybrid and a split bill in 2018. I came in 2007 to do a Very Bad Student Play. I saw my first ever stand up gig that year, it was Paul Sinha somewhere with Pleasance, I believe!

The pandemic has taught me compromise, to slow down, resilience. I’ve learned to make really good hummus and falafels. I hope I’ve absorbed some real lessons but my brain’s not very spongy anymore and I can’t think of anything particularly deep so perhaps not? I’m learning at the moment that selling a show is easier when the audience have less choice about what to see.

I wrote it and am producing it and performing it! This is because I have a god complex and am always optimistic how much time I have and what I can achieve! On the plus side, I do know the quality of my own work and know if anything goes wrong I only have myself to blame. My worst nightmare is nagging people for things to be done or finding sloppy mistakes when I’m paying someone to do something.
I’ve been previewing the show but it’s full premier will be at the Fringe! We’ll see what happens after…