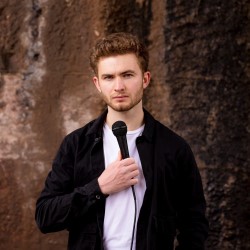 “I don’t feel I really got enough critical acclaim last year, so I’m back to throw as much shit at the wall as I can, until some of it sticks.”

WHAT: “Fraser Brown takes the audience on a hilarious and dark analysis of his own anxieties and worries. At only 22, Fraser (hopefully) has the majority of his life ahead of him, but is preoccupied with what’s happened in those first 22 years, for him to become the person who he is today. Unable to let go of the past, Fraser asks himself if he’ll ever be able to move on and forgive the grudges he’s held since his school days. An introspective extrovert, asking what it means to be happy; it’s Fraser Brown, I’m Afraid.”

This is my second year doing stand-up at the Fringe. However, as a by-product of me being lazy and uncreative, it’s almost the exact same show as last year. I don’t feel I really got enough critical acclaim last year, so I’m back to throw as much shit at the wall as I can, until some of it sticks.

In 2019, I knew a grand total of fuck all. (About doing a fringe show. Shapes, colours and numbers, I could understand. Although I now believe I may know more about all of the above than the fringe society does). I’ve learnt that flyering is exhausting, and so if you guys could just come to my show on your own accord, that’d be great.

I wrote this show, for the same reason any comedian writes their first show: sheer ego. I may endeavor to write something artistic in future, but for now it’s self indulgent drivel. Luckily I’ve managed to trick critics into thinking that it holds some kind of cultural value. But as long as it’s funny, who really gives a fuck? And luckily for my audiences, it is very funny.

‘It’s Not Rocket Science’ is probably at the top of my recommendation list. I saw the show last year (having no clue what to expect) and I was blown away. It’s a touching story of a young girl growing up, and making her way through the aerospace engineering industry.

‘2 Mouthed Men’ are a great comedy’s duo who combine sketch comedy with beatboxing, a combination I doubt you’ll find anywhere else. I saw their show the other day, and I’ve been giggling to myself about some of their sketch ever since.