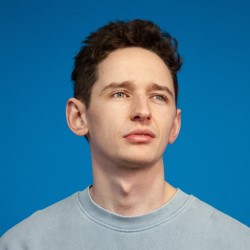 “What’s special about the Fringe I suppose is that it’s so massive, you really can find anything there: good, bad and appallingly self-indulgent… I’ll leave it up to you which category I fall into.”

WHAT: “Milo hasn’t received a voicemail in some time. He’d like to talk about that and quite a lot else. Returning to the Fringe after his hit 2019 solo debut, Pindos, Milo has questions. He’s 29, which is located somewhere in that annoying transitional phase between childhood and death, and he’s keen to know what the point of him is. Voicemail is a stand-up show which examines life, death, politics and the answering machine. ScotsGay Comedy Award winner 2019. ‘We need comedians like Milo Edwards’ ***** (ScotsGay.co.uk). **** (BroadwayBaby.com). **** (BeyondTheJoke.co.uk).”

No, in fact I actually slightly fear to count how many Fringes I’ve done in total for fear of becoming ever more aware of my own mortality but it’s my second Fringe with a solo hour of stand-up. What’s special about the Fringe I suppose is that it’s so massive, you really can find anything there: good, bad and appallingly self-indulgent… I’ll leave it up to you which category I fall into. So the key is to embrace the chaos of it, I think, and take vitamins.

2019 honestly feels like nine lifetimes ago so I’m not sure. As far as I recall that Fringe went well, so hopefully more of the same!

My show is an hour of stand-up called “Voicemail” produced by Impatient Productions and directed by the lovely Delyth Jones who has now been putting up with my ramblings about this show since approximately November 2019 and so is probably due some sort of award. I wrote the show, with Delyth’s gentle guidance, over the last 3 years or so and it’s changed a lot in that time but in a way that’s quite fitting as the show is, in many ways, about life changing events and what they do to us – especially the biggest life-changing event of all: death. There’s also some stuff in there about the economy and MILFs. Something for everyone.

Ok so – shows I would recommend are:

Alex Kealy – “Winner Takes All” – Alex is a dear friend and very funny guy and his stand-up appeals to the fact that I am fundamentally a nerd who knows a lot about politics. If this is a description of you, you will love Alex’s work which is always intensely logical in the way it attacks the British political status quo. Also he’s tall.

Olga Koch – “Just Friends” – I’ve worked with Olga loads over the years and she really is very funny and probably the most likely to give you sex tips of any show listed here. If you like bawdy stand-up with a sense of intelligent satire behind it you’ll love Olga.

Victor Patrascan – “The Dirty Immigrant” – Victor is a joy and a charmer and takes real pleasure in losing an audience only to claw them back, which I really respect. Really worth seeing and a hidden gem. I can’t find his show on the Ed Fringe site but it’s at the Newsroom!