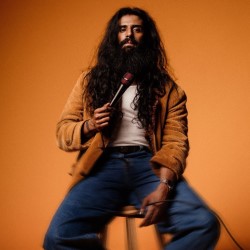 “I hope to tour the show after the fringe but we’ll see.”

WHAT: “In 1999, Vidura’s family left war-ridden Sri Lanka in search of a better life. Now in 2022 he’s performing an hour of comedy in a Scottish nightclub. Vidura Bandara Rajapaksa’s highly anticipated debut hour is the story of how he got here, covering all of life’s major talking points: race, religion and Ratatouille. As seen on ITV2’s The Stand Up Sketch Show. Best New Comedian Berlin finalist.”

I’ve visited the festival in the past, but this is my first time as a performer. I am really excited to be a part of it debuting my show, rather than watching from the outside like times I’ve visited previously.

That I can survive more than a few nights without getting on stage, a situation that was somewhat forced on me considering the events that followed 2019.

The show itself is written, directed, and performed by myself, and produced by Country Mile Productions. We connected after they saw me perform live at a competition. I hope to tour the show after the fringe but we’ll see.

They should try and see anything theatre or music. I would highly recommend Britney or Shelf over at the Pleasance. They’re both amazing sketch/musical duos. As someone that’s around stand-up most of the time it is wonderful seeing other forms comedy can take while I’m up here.