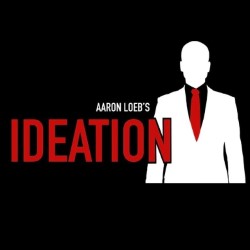 “Aside from the flattery, we want you to talk about our play because that is what it’s about.”

WHAT: “Hypothetically speaking, if you were in a boardroom with a ticking clock, the survival of humanity on your shoulders and a growing sense of a darker reality, would you succeed… no matter what? A group of corporate consultants battle morality and mystery with logic in this hilariously dark play. Do hypothetical actions have very real consequences? Is everything just as it seems and how do you know that? Can we trust you to let the paranoia sink in, as comedy and thriller distort the truth of this hypothetically real Ideation!”

This is our first time to Edinburgh as both a company and a production and, while it has been a LOT of work alongside our degrees at Exeter, it has been worth every minute of sweat, tears and (thankfully no) blood. The Edinburgh Fringe offers a completely different environment to our previous Exeter venues in which we can spark the play’s discussion around the “delineation between fact and fantasy.” With its sheer number of people and perspectives, this venue allows us to instigate the ripple of enquiry that the play demands: what do we know, what don’t we know, and who is in control? We hope that this will continue past our audiences and into the wider crowd at Fringe. Aside from the flattery, we want you to talk about our play because that is what it’s about.

The biggest thing we have learned is adaptability. Having had our slot at the Space booked since 2019, EUTCo’s trip to Fringe has been a longgg time coming but we have certainly stuck with it. Due to restrictions, our Fringe show last year was re-organised to be performed in an Exeter festival instead, and in 2020, we didn’t get further than online performances. But, we remained adaptable, and this has only strengthened our practice as a company to deliver intimate, small-scale productions with high-quality acting on our way back to perhaps larger spectacles.

Our director Chlöe Hallsworth first came across and read the script (by Aaron Loeb and published in 2016) about four years ago. As a play that is not widely known in the UK, Chlöe was excited by the possibilities that could take it from page to stage. When the opportunity to pitch it as a Fringe play for Exeter University Theatre Company came about, it had to be done. Although produced by EUTCo, the production company is made up of students across various years and degrees, some of whom have just graduated having never studied drama! As such, our previous performances were local to Exeter but we are thrilled with the reception we’ve been receiving in Edinburgh and hope that our team will continue with their talent and abandon their seemingly safe(?) career path from a history degree.

There are so many brilliant shows here this year and Show Me What You’re Maid Of and the Last Words are just two of our fellow groups from Exeter (us, biased…?). But new company favourites from further North for have been ‘When We Were Normal,’ Leaves on the Line,’ and ‘Careless’. All five shows (and our own!) have brilliantly strong female minds behind them and are putting raw, thoughtful characters on stage. Plus, they’ve been friendly faces amongst the chaos!