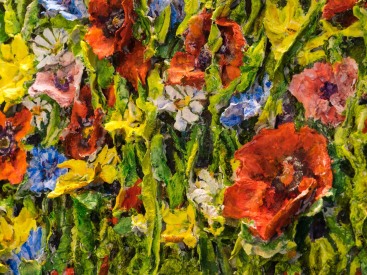 “Prepare to be dazzled”

Walking through the doorway into Unexpected Excesses (an exhibition of work from Jan Knibbs and Lizz Watts), my immediate impression was a riot of colour, texture and form. However, thankfully Watts was there to guide us through the collection and how it was created.

One of the most striking pieces, a framed collage called The Return, juxtaposes broken ceramic teapots with papier mache flowers, which appear to grow from the ground in which the pottery has fallen, representing the circle of life. It was full of vibrancy and energy, and a great example of the vivid style of the work on show.

In talking to Watts about her pieces, she revealed that she likes her work to develop organically. She may start off with an idea but at some point it develops a life of its own, and many pieces tell a story. A favorite theme is nature and the changing seasons. A particularly impressive vase with a group of swans’ necks curving from the lip was always intended to be connected to swans thematically, but the final form they took in the piece was completely organic and unplanned. There are certainly no two pieces alike.

The clothes, hats, shoes and other gloriously opulent and embroidered textiles by Jan Knibbs were displayed on mannequins and elsewhere scattered through the exhibition, the effect combining gracefully with the ceramics.The philosophy behind both the textile and ceramic creations is concerned with practicality as well as being stunning to look at: the clothes and shoes are wearable, the bowls and vases usable.

What really makes this exhibition special is that it is both interactive and experiential. Not only are visitors able to talk to the artists but they are also positively encouraged to handle the pieces, feel them and examine them closely. In doing this it can be a pleasant surprise to find a continuation of the decorative motif on the inside or throughout pieces, as well just on the surface. On top of this, when I visited, a harpist (Bianca Watts) appeared and played for us to give an added layer of decadence, and I was lucky enough to be given a glass of Prosecco to enrich my Sunday afternoon with further “unexpected excess”. If that weren’t enough, visitors are invited to contribute a few lines to a daily poem, started by poet in residence Dawn Gorman, in order to really become part of the work. 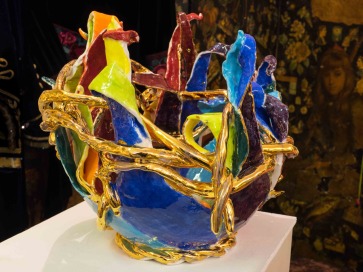 As one might expect, this exhibition is an extravagant, beautiful and seemingly chaotic collection of work. Yet there was a real cohesion to it – the ceramics complemented the textiles, and all the added extras fit perfectly into the overall theme. On close examination there were many hidden treasures: ribbons at the back of dresses, decoration inside pots, and lots of small details that made me want to keep examining every piece further. The atmosphere in the room was intimate and relaxed without feeling stuffy or overpowering.

This exhibition is called Unexpected Excesses, and it’s easy to understand that some visitors may see the room, and indeed some of the pieces in it, as too much, too ornate, a gilded lily. But whether it’s your personal taste or not, it’s definitely worth experiencing. There is a varied programme of guest artists and things going on, from poetry to music, as well the incredible art on display. Check the programme before planning your visit, or just turn up and prepare to be dazzled.

Visit the Other  archive.

We wrote @EdinFortyNine a song to thank them for saying we were their top pick for cabaret!! #assemblyfest #edfringe pic.twitter.com/3snPuFk9oX

It’s been two weeks now since the official programme launch, and we’ve finally made it through all 439 pages, featuring over 3,330 shows. Needless to say we’re VERY excited for what this year’s Fringe has in store.

Being the arts geeks that we are, Alan Brown and I have managed to narrow down a list of 49+3 shows we’re really looking forward to seeing, shared below to help guide your choices.

We haven’t been bribed, cajoled, threatened or in any other way influenced in making our selection, we’re just being honest.

+ Many thanks to Loclan Mackenzie-Spencer and Andrew Strano of Nailed It! for their song in praise of our choices!

So, without further ado…

Alan’s top 10
Ada
Down & Out in Paris & London
Light Boxes
Our Ladies of Perpetual Succour
Picasso stole the Mona Lisa
Scarfed for Life
The Sunset Five
The Titanic Orchestra
Wendy Hoose by Johnny McKnight
What Would Spock Do?

Phew – bring on August! If there are any other shows you think should be brought to our attention please get in touch with us at plus3@edinburgh49.com

‘My aim is to document things that everyone can see if they want to but that people do not really notice in the course of their everyday lives… To record the unspectacular, something that takes place in public everywhere and is able to tell part of the story of our lives …’ — Barbara Klemm

Photojournalism is a strange beast. With its origins in war photography, the medium straddles the documentary aspirations of reportage and the loftier aspirations of artistic photography – with the best examples able to move seamlessly from one to the other. Such is the case with the images that make up the current exhibition at the Stills gallery, ‘Leap in Time’: Erich Salomon & Barbara Klemm. Organised in conjunction with the Institut für Auslandsbeziehungen/Institute for Cultural Relations (IFA), Germany, and the Goethe-Institut, Glasgow, this exhibition presents the work of two of Germany’s most profoundly influential and sensitive photographers. Though there is no overlap in the careers of Salomon and Klemm, together their work provides a deep, poignant and multifaceted view of twentieth century German life.

Upon entering the exhibition space at Stills many visitors will be tempted to linger among the more recognisable and recent subjects of Barbara Klemm’s work in the front gallery. For the sake of chronology, however, I would recommend charging through to the rear gallery and beginning with the work of Erich Salomon. Though he took to photography late in life, Salomon’s innovations came to dominate the golden age of photojournalism, including coining the phrase “the candid camera” and pioneering “hidden camera” techniques in his work – famously cutting a hole for the camera lens in his bowler hat. With his education, wealth and social standing, Salomon found easy access to the highest echelons of Weimar society. Such access allowed him to photograph scenes such as the Reichstag debating chamber, private meeting rooms at the League of Nations and The Hague, imbuing the scenes with a reality and a human urgency that leaves the printed word behind.

Salomon’s social access extended beyond politics, and the exhibition includes candid and personal photographs of contemporary celebrities, including an intimate photograph of Marlene Dietrich on the telephone with her daughter. Even without celebrity subjects, Salomon’s work is characterised by his ability to capture unguarded moments, those opportunities to peek behind the curtain of public events and see the actors as fellow human beings.

Barbara Klemm’s portion of the exhibition, which occupies the front gallery, the stairwell and the reception area one floor below, beautifully parallels that of Erich Salomon. Though Klemm’s career spanned from the 1960s through to the 1990s, the loose groupings of celebrity, politics, society, and social commentary retain their power. Working at a time when photojournalism had become codified as a profession, there are necessarily differences between Klemm’s work and Salomon’s, but Klemm nonetheless shares Salomon’s gift for isolating the unguarded human moment within the ebb and flow of history. She possesses an uncanny ability to capture the individual at a moment when they stand for something greater than themselves.

Nowhere is this skill more evident than in Klemm’s political photography. Covering the tumultuous period surrounding Germany’s reunification, Klemm’s photographs manage to display great tension and joy, but they also find moments of stillness and contemplation – often within the same image. Among my personal favourites is the photograph, View Over the Wall, Berlin 1977. Here the ominous, monolithic imagery of the Berlin wall dominates the space, while the mood is gently subverted by the presence of two men casually  standing and chatting atop an unmanned watchtower while a young boy playfully perches on the tower railing.

Notably, within this exhibition of twentieth century German photography there are few overt references to the Second World War. In fact, the Nazis make a lone, foreboding appearance in Salomon’s photograph National Socialists in Their Party Uniform in the Reichstag, Berlin, 30 October 1930. From a purely practical perspective this was because Salomon didn’t photograph them; he largely disregarded the Nazis and considered their actions unworthy of his interest. He was able to leave Germany for Holland and worked in The Hague but was detained during the Occupation. He died in Auschwitz in July 1944.

This is not to say that the war is ignored by the exhibition; its antecedents and effects are as present in both photographers’ work as they are in the lives they photographed. Rather, the effect of this absence on the exhibition is akin to that of the candid portraiture in both artists’ work. The goal of such photography is to catch the rarely seen side of a subject we’ve seen so often that we feel we know it. The combined work of Barbara Klemm and Erich Salomon create a complex portrait of Germany that is often overlooked, shining a light on the more private, unguarded and human side of the country’s recent history.

This September Edinburgh49‘s Three to See events at Summerhall are:

“Only Wolves And Lions takes a fresh look at human behaviour in the pursuit of happiness. After food clothes and shelter, what do we need? Exploring ideas surrounding community, isolation and the meaning of the word crisis, Leo Kay and Unai Lopez de Armentia invite you to cook, eat and speak together”

“Michael Nyman’s first ever exhibition in Scotland will consist of a major installation in Summerhall’s Upper Church Gallery (off Hope Street Terrace) showing simultaneously the video film-maker, photographer and composer’s ten (10!) remakes of the famous vintage film “Man with a Movie Camera” by the Russian film-maker Dziga Vertov and his wife Yelizaveta Svilova (who edited the film).”

“Brought to you my Michael Pedersen and Kevin Williamson Neu! Reekie! is a delicious feast of spoken word, music, animation and film fusion.”