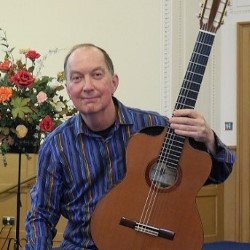 “He let the music speak for him, and as a teacher, he was able to establish a quiet, understated rapport entirely appropriate for the appreciative audience in front of him.”

A summer Fringe Thursday afternoon was deceptively sunny and warm, so I was pleased to see a good crowd in the cool of the church.

The guitar is an easy musical instrument to play badly and a fiendishly difficult one to play well.  With frets clearly marked and six strings positioned level (as opposed to arched as on the violin family) it is easy to strum, and the vast panoply of pop music is based on just three chords.  Easy, especially if a pickup is doing the amplification for you.  But when it comes to something more sophisticated, whether it be the complex rhythms of the Bossa Nova or the plaintive wail of the Flamenco, we are in different, dangerous and exposed territory.  The guitar gives off surprisingly little sound; the left hand requires the iron application of finger tips, the right the looseness of a painter’s brush yet with thumb and three fingers all operating independently. That’s why I took it up late in life partially to ward off Alzheimer’s, for it is a real brain stretcher. And it looks so easy…….

On Thursday we were in the company of one man and his guitar, an American born, Scotland domiciled since 1989 Stephen Morrison who took us through a catalogue of music that ranged from the Renaissance to the twentieth century including such greats as Fernando Sor and Joaquin Rodrigo (yes, the one who wrote that concerto) in an hour long afternoon of entertainment.  Stephen Morrison is an accomplished, modest guitarist who said not a word during his recital.  It wasn’t necessary for, of course, he let the music speak for him, and as a teacher, he was able to establish a quiet, understated rapport entirely appropriate for the appreciative audience in front of him.

Three Pavans by Luys Milan (1500-1561) played in the lutenist style (and originally written for a vihuela, a guitar like instrument of six double course strings that were apparently tuned in unison) took us back immediately to the sixteenth century, followed by Les Folies d’Espagne & Menuet Op 15a by Fernando Sor (1778-1839) albeit written over 250 years later, demonstrated again the plucked chord style of writing and playing as Sor set out his stall as the one of the great composers of classical guitar as we have come to know it.

We then firmly entered the late nineteenth century of guitar composition and heard two pieces by Francisco Tarrega (1852-1909), Danza Mora and Recuerdos de la Alhambra, interspersed with Aranjuez, ma pensée by Joaquin Rodrigo (1901-1999).  The Rodrigo was arranged by the composer in a monophonic setting with very occasional chording.  Meant to show off one of the most heartfelt melodies of all time and pleasingly familiar, it did not work, partly because of the deeply restrained, unflashy nature of the guitarist’s style. Alhambra, also deeply familiar, somehow worked better.

Centrepiece of the Recital was a break from the Spanish composers, Scottish composer Thea Musgrave’s (b. 1928) Postcards from Spain (Five Serenades).   The work, written in 1995, seeks to conjure a mood of impressionism but with the exception of the second movement Molto Espressivo came across as largely abstract in style.

Stephen Morrison concluded the recital with Sonata Op.61 by Joaquin Turina (1882-1949), a pleasant piece in three movements where the impressionistic reflections of Paris were effective, and Preludio Y Danza by Julian Orbon (1925-1991).  An Asturian who moved to Cuba and then New York this was his only composition for guitar, and like all good things, left one wishing he had written more.

So, overall our hour long recital was an interesting musical journey through the musical history of the classical guitar, amply demonstrating its potential for technique, notwithstanding its limitations in dynamics.

I saw on Facebook that a friend of mine was going to Wednesday’s Edinburgh Quartet Rush Hour Concert, and “ticked’ that I was going too. “They’re playing the Rasumovsky Quartet”, he enthused, virtually. “Which one?”, I replied. “Eh?”, came the rejoinder. For not many people know that there are in fact three, all commissioned by Count Andres Rasumovsky, the Russian Ambassador to Vienna, with the stipulation that they should contain Russian themes. Well actually, the one we heard, the third and arguably the finest, didn’t, but it contained an awful lot of interesting new approaches to the genre.

The Edinburgh Quartet bring a pleasingly creative approach to their programming and tonight we heard from Edinburgh Artist Erik Petrie, who was working alongside them this week at their Residency at the Ocean Terminal and just hours earlier had completed a magnificent, colourful violin scroll canvas which the Quartet proudly displayed. Second violinist Gordon Bragg discussed the intriguing relationship between quartet and artist with Erik before the concert started.

The Edinburgh Quartet have recently adopted a practice of having a theme for their concert series, and the theme for this early part of the New Year is “Revolution”. For certain, the works by Mozart (French Revolution) and Shostakovich (post Russian Revolution and very influenced by Stalin) could be deemed as appropriately covered by this banner, but for Beethoven in 1808 it was stretching a point, other than that the Rasumovsky Quartet, Op.59 No.3, is certainly revolutionary in construction.

The first movement Allegro opens with a series of diminished sevenths punctuated with silences that set off an atmosphere of wonder and mystery, resolving into C major and we are away in more conventional quartet form. Quite a shock for its audience then and quite a surprise today. Comparisons and styles can legitimately be made to `Mozart’s “Dissonance” Quartet.

The Andante con moto employed a lot of pizzicato and if Beethoven was trying to persuade his sponsor that the quartet contained a Russian theme it would be here, with its intimations of folk song.

Come the third movement Allegro we found ourselves listening to a cheerful minuet, yet just as we were beginning to relax and take it easy we barnstormed into the final Presto at breakneck speed. The players did not make one slip in these very demanding passages which they delivered with real verve. One felt the spirit of troubled Beethoven, hounded by deafness and in the process of beginning to admit it to his brothers and close friends. On the early sketch of this movement he had written “Let your deafness be a secret no longer – not even in art.”

Yet again, despite a number of personnel changes, the Edinburgh Quartet have some magic dust around them that creates real homogeneity and synergy, giving the impression they had been playing together for years. We had a relaxed yet assured, inspired performance. The tight, together playing we have become accustomed to, and sheer listen-to pleasure, was joyfully experienced tonight as always.

“the standard of playing remains remarkably high …all the more commendable in the main work that was technically very demanding in terms of phrasing, notation and timing.”

The Edinburgh Quartet are skilful not only in their playing but in their approach to their constituency. Their 2016/17 series is a combination of daytime, rush hour and evening sets in order to reach new listeners and move away from the relative predictability and, for some, the difficulty of getting to evening gigs. Each season, or part of season, has a theme, and this season’s theme is vested in their Scottish roots. Tuesday’s concert programme contained works inspired by the island of Skye and the actual words of Robbie Burns. Informal in approach within the relaxing environs of St Andrew’s and St George’s West in Edinburgh, the occasion is probably more accurately described as an informal lecture recital rather than a concert, and none the worse for that.

Cleverly, the band started with a brief introductory piece, demanding in intonation and timing, which they played without music. Gordon Bragg then interviewed composer Alasdair Nicolson who spoke of the inspiration behind his String Quartet No 3, “Slanting Rain”, which was the centrepiece of the evening. After that Mairi Campbell, guest musician and one of two violists in the opening number, spoke of her love of the Scottish dance and folk music idiom and her approach to her music.

On to the main event. “Slanting Rain” is a six movement work full of chromatics, a wide variety of bowing techniques, harmonics and dissonance. It is a difficult play, and not an easy listen. I did think that the advanced technical construction of the work got in the way of its musicality. The introduction to the fourth movement, “Impossibly distant tree lined paths”, treated us to a melodic introduction by EQ Apprentice Competition winner Morag Robertson on viola, and the sixth movement, “Into an abyss made of time”, was a very clever melange of time signatures and orchestration that definitely worked.

The evening drew to a conclusion with a deeply moving rendition of a Robbie Burns poem sung and played by Mairi Campbell, followed by James MacMillan’s “Memento”.

Those familiar with the Edinburgh Quartet’s line up would have noticed some new faces, some planned, some drafted in at the last moment. Tristan Gurney has left and the first Violin chair is currently being recruited for. Tonight’s locum was taken ill on the morning of the concert, and Gordon Bragg nobly took on the first violin part, bringing in Rachel Spencer on second violin. Morag Robertson will take the viola desk for the first part of the season while Fiona Winning remains on maternity leave.  Mark Bailey remains at the cello desk.   All these changes notwithstanding, the standard of playing remains remarkably high and, astonishingly, the cohesion of the band appears completely unaffected, as if they had all being playing together for years, all the more commendable in the main work that was technically very demanding in terms of phrasing, notation and timing.