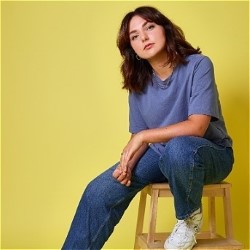 “This is my first time doing an hour of stand up! I’ve been up to the festival before in a variety of other contexts (working as a receptionist, doing a sketch show, doing tech for other shows) but I imagine this will be a pretty different experience.”

WHAT: “50% Polish, 50% Italian, 100% legend. Ania Magliano’s debut show tackles the stuff that matters: Lush, horse girls and buying a cat off Gumtree. Winner of the Leicester Comedy Festival Best New Show 2022. Writer for Amelia Dimoldenberg’s Chicken Shop Date. As seen on The Stand Up Sketch Show (ITV2) and Dave Online. ‘Already has the cool, calm and collected stage presence of a standup veteran’ (Guardian). ‘A finesse usually seen after decades in the game’ (DIVA). Come if you want to, but absolutely no worries if not.”

This is my first time doing an hour of stand up! I’ve been up to the festival before in a variety of other contexts (working as a receptionist, doing a sketch show, doing tech for other shows) but I imagine this will be a pretty different experience. Finally I’ll get the chance to talk for an hour uninterrupted!

I’ve written a long diary entry after every Fringe I’ve done, and each time I look back on them they make me cringe to my very core. In terms of general life lessons since 2019, I’ve started therapy so I reckon I’m pretty much sorted personality wise?

My show is written and performed by me, who I’ve had a long and tumultuous working relationship with. It’s being produced by Country Mile Productions and I’ve had creative help from Jordan Brookes – I don’t throw the words ‘dream team’ around lightly but this is it! In October I’m doing a week at the Soho Theatre in London, and Aberystwyth Comedy Festival.

Chloe Petts for an hour of fantastic stand up and fantastic vibes. Crizards for a really wonderful and hilarious Cowboy themed show with songs that I’ve had stuck in my head since I first saw it in May. Nic Sampson for a very funny, very well performed show about RUNNING! Leo Reich for comedy so good I can’t put it into words. Sophie Duker, need I say more!!!!!!! I’m also super excited to see Olga Koch’s new show as I’ve loved every other one she’s done. And Snort is the best and most fun improv show.