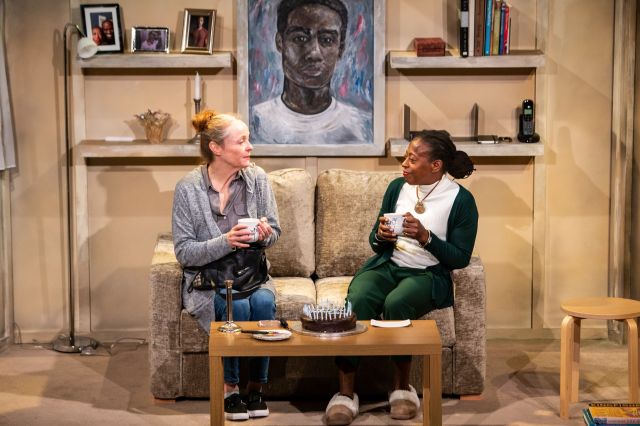 “…brace yourself, you’re in for an emotive and important ride!”

WHAT: “On Michael Thomas’ birthday, his cake sits in his mother’s living room, its candles burning undisturbed. Jackie wants to clear her conscience, whilst Evelyn’s got a big speech to deliver on the 15th anniversary of Michael’s fatal stabbing. Are some things better left unsaid?

Shortlisted for the Alfred Fagon Award, seeds tells the story of two mothers united in sorrow, sharing the hardship of protecting their sons.”

DATES: Postponed for the duration

MORE: Click Here! (Including information about possible disruptions to the tour)

When I first read the play, the writing hooked me: the measured way Mel writes means you’re constantly trying to work out what is and will happen. It’s a real thriller. I feel that it’s unique in its representation of two middle-aged women, two mothers fighting for their sons in a world where the rise in knife crime means that too many families are dealing with the aftermath of these tragedies.

What’s the one thing about this show that everyone should know BEFORE they take their seats?

This play presents two characters often underrepresented on stage and deals with subjects that feel so urgent. It might feel tense, uncomfortable at times and triggering because of the subject matter it explores but these ideas need to be explored in order to create change. So brace yourself, you’re in for an emotive and important ride!

What makes this production unique?

The fact that it looks at those left behind after a tragic incident, years after it happened, which is something that the media doesn’t often do. I feel that, as a society, we need to support those who are still dealing with the pain of loss years later and be aware of the effects it has on families and loved ones. ‘seeds’ explores real-world, important issues, it feels like something that can touch people and be a catalyst for change.

What’s the one thing you know now that you wish you’d known at the start of rehearsals?

That this production was going to work out as well as it has. At the start of working on any project, you hope and pray that you can create something of quality that resonates with people. I knew that the material was strong, so I wanted to do it justice. The feedback from audiences has been very positive so far so I really thank God for what we as a team have achieved.