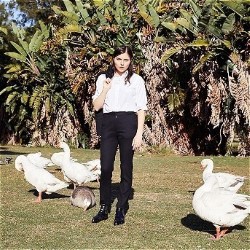 “I moonlight as the cello accompanist for Australian improv duo BearPack.”

WHAT: “99 problems. 50 minutes. One woman. One spider suit. 30 seconds per problem. An insufficient number of solutions. If you currently have, or have ever had problems, the new show from award-winning comedian and journalist Ange Lavoipierre is absolutely for you. This frantic yet beguiling display of self-pity is the holiday from your own problems you’ve been waiting for.”

Whenever anyone asks me what Edinburgh Fringe is like, I tell them it’s the most fun you can have as an adult, and I stand by that, although long haul flights from Australia are certainly a close second.

This is my second time bringing my own show to Edinburgh, but my millionth performing there, because I moonlight as the cello accompanist for Australian improv duo BearPack (Steen Raskopoulos & Carlo Ritchie). I found I was even funnier when I talked, so my 2022 show is primarily talking.

The best thing about it really is the genuine sense of chaos and possibility. You can meet just about anyone, see some truly wild shows you never imagined would exist, and you get to do it all in a deeply beautiful (haunted) city.

My main takeaway from 2019 was to never flyer anywhere near birds, because they will do an enormous shit(s) on you. I also learned to say yes to everything, talk to everyone, and to be very good at wrapping up a conversation. I’ve nailed the first two, but am yet to master the third. And birds are literally everywhere, so maybe the real lesson is to never flyer at all.

Honestly though the festival can feel overwhelming as a performer, and success is an abstract concept in that environment, so I have decided that the way to approach it is to fully enjoy whatever good things happen in a day, because in the words of Mary Oliver, joy is not made to be a crumb.

I like to think that my niche is comedy-horror. I wrote the show at a time when I thought spiders were following me, and ostensibly, it’s an hour-long attempt to work out why that’s happening. Really though I knew the notion of being followed by a pack of organised, interventionist spiders was insane even at the time it was happening, so it’s actually a show about the crazy things we let ourselves believe.

I’ve been performing this show on the Australian festival circuit for 6 months, and my Edinburgh season, produced by RBM, is its last stop.

Sam Cambell’s shows are a kind of magic trick where you laugh the whole time and then you walk out and you can’t remember a single thing that happened because it was too weird. Real moonbeam on the sand stuff. Julia Masli is a pure and charming clown who is totally magnetic to watch. Garry Starr is a fucking idiot (see him). Tom Walker is a deeply strange man who has thought of things that no-one else ever would, and all of them are funny. Viggo Venn is a very tall Norwegian clown, and honestly I don’t think he knows how not to make you laugh. Dreamgun do the world’s funniest film reads, and their shows are always a joy. They also have very nice Irish accents. New Zealander Eli Matthewson is instantly loveable, and that feeling will only increase over an hour of watching his stand up. And Joz Norris’ character Mr Fruit Salad was the hardest I laughed in 2019. I can’t wait to see what exquisitely half arsed character he invents this time to exceed it.