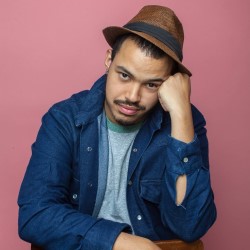 EdFringe has “gotten more expensive over the last few years for sure, this year is out of control and it needs to change otherwise I don’t know how much longer I’ll be able to afford it.”

WHAT: “Life’s getting a bit serious innit? Political instability, social politics making people less social – life now is guilt, followed by shame. However, what is life, if nothing but a distraction until you die? Archie Maddocks tackles the struggles of being alive in his latest hour of provocative, exhilarating and, crucially, hilarious comedy. ‘Superb timing and quick wit’ ***** (RadioHaHa.co.uk). Daily Mirror’s Funniest Jokes and Evening Standard’s Best Jokes of the Fringe 2018. ‘A real highlight of the evening’ (BBC Radio 4 Extra). ‘Super cool, super smart storyteller’ (Bruce Dessau, BeyondTheJoke.co.uk and Evening Standard).”

WHERE: Just the Tonic at The Mash House – Just the Bottle Room (Venue 288)

This is my sixth year in a row (my 4th solo show) and honestly, I think it’s self-punishment at this point. Nah – because I enjoy making and bringing up a new show, which always pushed me forward as a comic, which has got to be the goal, right? It’s gotten more expensive over the last few years for sure, this year is out of control and it needs to change otherwise I don’t know how much longer I’ll be able to afford it. Also, the dread and terror seems to grow bigger every year with the assumption that I’ve got nothing left to say – really looking forward to next year…

Several TV writing jobs, playwriting jobs and Film jobs have come and gone – it’s been a fucking hectic year, which I’m very grateful for because it’s kept me eating my daily Nutella rations. I was also the BBC writer in Residence for radio, which was great. Ultimately, I’m now an incredible success (imagine if I was this arrogant) who deserves great things to happen at all times.

I’m going through an existential crisis for the first time in my life now that things are going moderately well (ahhhh, how ironic, life is ok so let’s find something to make an issue) and I figured I’d just run with it. I’ve been thinking about the ideas of existence and reality and time and that they’re ultimately all personal interpretations of the world around us, thus rendering all of it fake due to a lack of harmonious shared experience beyond what we say to each other. And yes, I have a director (Sophia Charalambous, hire her, she’s great)- she does all my shows and basically has to tell me to stop being a dick most of the time.