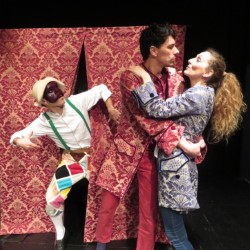 “Having a long run allowed us to test our show with an international audience and gave us the boost we needed to dive into the Fringe world.”

WHAT: “Fancy a trip to Venice in Edinburgh? Join Arlecchino as he takes on two jobs and two masters. Midsummer madness rages! Master number one: Beatrice, disguised as a man, searches for her beloved Florindo and she hires Arlecchino. Master number two: Florindo, accused of murdering Beatrice’s brother, escapes to Venice and he hires Arlecchino. True love or tragedy? At his wit’s end and starving, will Arlecchino ever get his dinner? Three versatile actors, nine roles! Physical storytelling with masks, puppets and music bring Venice to life, blending tradition and innovation.”

At home in Venice, we discussed coming to Edinburgh Fringe Festival. After months of planning and crowdfunding, Bottegavaga has fulfilled a dream we’ve had for ages.

It’s our first time to the Edinburgh Fringe Festival, and we’re here to bring our theatre, closely interwoven with our beloved city, out of Italy, in hopes of sharing Commedia dell’Arte and the genius of Carlo Goldoni abroad. Edinburgh seemed to us the perfect place to make this dream come true!

Edinburgh Fringe is the third-largest ticketed event in the world (after the Olympics and the World Cup). It’s an ‘artistic village’ where we feel part of a cosmopolitan community. We’ve been able to meet artists from Poland, UK, Russia, Japan and beyond: we are inspired to see other artists’ work and to know different artistic ways of approaching theatre.

In the past, Commedia dell’Arte troupes travelled throughout Europe, influencing authors like Molière and popular traditions such as the Punch and Judy shows. We’d also love to go on tour and find new audiences. Commedia dell’Arte is a theatre that conveys delight and celebrates playfulness. In times like ours, we think people need this. There’s a more serious side, too. Venice is a city in crisis due to unsustainable tourism, and we want to show the world Venice’s real soul, its struggle to avoid becoming a museum or a Disneyland. We wish to achieve this, using an international language, while keeping old values alive and making them understandable and appreciated.

So, our Arlecchino Torn in Three is an experiment, and we wanted to see if our modern-day version of Commedia can be enjoyed by a contemporary audience from all over the world. And Edinburgh has been just the place for this. We’ve also discovered that even audiences unfamiliar with masks and Commedia dell’Arte appreciate our show, although some journalists didn’t quite understand that Commedia is a crazy world where anything can happen, even if it ‘doesn’t make sense.’ Our show keeps changing each night, thanks to a dynamic, continuous relationship with the audience.

We’ve learned a lot about the British sense of humour, about how to do flyering (and even sent our producer onto the streets in a Commedia mask). We’ve had a go at street theatre on Virgin Money Stage, and Arlecchino adopted a red phone box for a Dr. Who stunt. We’re baffled by Scottish deep-fried pizzas, enjoyed whisky tasting and are now shortbread addicts. Above all, we’ve had the chance to exchange and network with a lot of extraordinary artists and see their shows. We still have one more week to go, but so far it’s been an amazing experience for us. The Fringe is certainly a challenge, and it’s one we’ve found well worth trying!

We’re also acting teachers, and are leading Commedia workshops for children at the Italian Cultural Institute. What a joyful time: Scottish and English kids had great fun playing with masks and experimenting with different characters in their group.

At the Demarco Foundation, we did Spotlight on Venice and talked about our work and our city, which, like Edinburgh, is in peril. There, we met the legendary Richard Demarco, one of the founders of the Fringe; his love of theatre is truly inspiring.

What we really looking forward to is to make a bridge between Italy and the UK, to create a cultural exchange with like-minded people, to bring our experience in Commedia and physical theatre as a resource for actors who want to train and explore the foundations of theatre. We want to find the time and space for the art and culture of different peoples that can stir and nourish our spirit, stretching beyond all boundaries.

The biggest thing that’s happened to us last year? In 2018, Bottegavaga performed for a whole season in Avogaria Theatre, an iconic theatre in Venice. It was founded after World War Two by Giovanni Poli, a leading Commedia director, and renowned artists such as Jerzy Grotowski also performed there. Having a long run allowed us to test our show with an international audience and gave us the boost we needed to dive into the Fringe world.

At Avogaria Theatre, we held special Goldoni post-show buffets and this has been great! It’s our ‘theatre research – Italian style’. Our chef Anna Santini recreated dishes from the time of Goldoni. As our guests munched on these delicacies and enjoyed glasses of wine, the company discovered experts and performers  keen on getting to know our work better. It has been a lovely mixed audience experiment… multicultural moments that encouraged us to take part in the Fringe.

Our Arlecchino Torn in Three is an adaptation of Carlo Goldoni’s The Servant of Two Masters (1746). The original play has a cast of nine, but has been reworked by the director Alberta Toninato to be performed by three actors, who double (or even triple) roles in a fast and furious romantic comedy. Goldoni’s The Servant of Two Masters has given us the opportunity to work on a very sophisticated comedy for a new audience.

As we created the show, we researched body language and gesture, with the aim of creating a playful script that’s universally accessible. We use traditional Commedia masks with a modern twist to present our ideal kind of theatre: universal, sincere, immediate and essential, without special effects, and highlighting the physical skill of the actor. Thus, our physical storytelling is a showcase for the actors’ creativity and versatility.

Arlecchino Torn in Three offers both entertainment and the pleasure of performing a classic, blending the popular tradition of Commedia dell’Arte with literary and stylistic virtuosity. With the mask, everything becomes a game: mistakes, work, love, even hunger or poverty. Mask characters such as Arlecchino teach us the possibilities for happiness in a confusing and often difficult world.

We’ve re-worked our script for Edinburgh, using both English and Italian. As far back as the 16th century, Commedia dell’Arte deployed what is known as ‘gramelot’, an invented language, full of unknown words and sounds which was highly entertaining. We try to use English in this way, mixing it with Italian and Venetian dialect, creating a sort of new linguistic code for a contemporary audience. The artistic/linguistic research we’ve been passionately carrying out may be very similar to the ‘modernity’ that Carlo Goldoni sought in his plays all his life.

Bottegavaga have been working together for more than ten years, a Venice-based adventure that started back in 2005, exploring Goldoni on one hand and Shakespeare on the other. Actors Betty Andriolo, Vanni Carpenedo, and Christian Renzicchi trained in Commedia and also with Yoshi Oida, Emma Dante and Gabriele Lavia. Alberta Toninato is the director, and the UK producer is Valerie Kaneko-Lucas. Professor Margaret Rose from the University of Milan is our consultant. We’re an Anglo-Italian company. For us, working together has always been an endless quest supported by a strong bond, perfect chemistry and a lot of passion!

After the Fringe, we’re working on taking our show to Chicago.  We’ve been invited to take part in the Chicago Physical Theatre Festival in June 2020, and we’d love to get there!

Paolo Nani’s The Letter – his show is an amazing example of how comedy can be done with no words and just a suitcase of props. We’ve enjoyed seeing him on TV in Italy and were thrilled to see him live in Edinburgh.

The Trial by Stone Crabs – It’s an interactive show where the audience becomes the jury in a trial about LGBT+ rights. Ines Sampaio is a multi-talented young actor-musician doing 6 roles, ranging from the trans protagonist to her crotchety homophobic father.

Limbo – Teresa and Anjrej Welminski were members of Kantor’s troupe, and this show is visually stunning, evoking an infernal waiting room populated by eccentrics.

The Forest – Performed by graduates of the Moscow Arts School, it was a poetic and moving devised show about our disconnection from nature, a Russian take on the environmental crisis.

Zeroko’s Tea Time – a pair of bowler-hatted Japanese guys perform magic with the simplest of props, such as umbrellas and tea cups. It’s a heartwarming and charming show from Tokyo that made us smile on a rainy Edinburgh day.