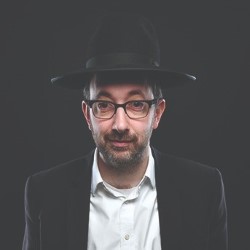 “I have just finished a five-week run Off Broadway in New York.”

WHAT: “Ashley Blaker isn’t your average Orthodox Jewish man. He’s also an internationally acclaimed comedian and now, for the first time, is performing a show for us gentiles, direct from his off-Broadway run. How did a secular Jewish comedy producer end up becoming ultra-orthodox? How does he live between two very different worlds? As heard on BBC Radio 4. ‘Has audiences on the floor’ (Jerusalem Post). ‘Relentlessly funny… Blaker brings something totally unprecedented to stand-up’ (Jewish Chronicle). ‘A wittier man than I’ll ever be’ (Matt Lucas, Little Me).”

I came to Edinburgh as a punter in both 1992 and 1993. I then came several times as a TV producer looking for talent for different show. This is my first time though as a performer.

The last year has been incredible. I have performed shows in South Africa, Israel and Canada; made my first BBC Radio 4 show; and I have just finished a five-week run Off Broadway in New York. Coming to Edinburgh to perform my debut show will be an equally exciting experience.

The show is about how I went from being a secular Jewish TV producer to being strictly orthodox and not even owning a TV (it’s forbidden!). And considering how crazy my life is now, hopefully I’ll be able to explain why on earth I still do it. This is the show’s premier apart from three previews in July so it is completely unchartered territory for me. As for where it will go next, that really does depend on how it goes down I guess. Maybe I will retreat back home and not want to come out for a few months! Ideally, I’d like to tour an extended version of the show around the UK at some point soon.

It will all be a let down thereafter so maybe they just need to stick to the Tattoo. I do love Keiran Hodgson though and Max and Ivan are peerless when it comes to sketch comedy. I am sure both of those shows will be amazing. However, if I am wrong, please don’t come to me asking for your money back. That’s not how this works.