“I’m just as excited as ever to be in Scotland.”

WHAT: “Before Voldemort was He Who Must Not Be Named, he was just Tom Riddle, another moody teen at Hogwarts. Join Tom and his best friend/snake Nagini on a hilarious musical adventure packed with magic, hormones, and more than a few murders. From two co-creators of Thrones! The Musical and fresh from sold-out performances at the Upright Citizens Brigade Theatre in Los Angeles comes a Harry Potter musical parody that is sure to leave you spellbound!”

No, it’s my seventh in a row in fact, and I’m just as excited as ever to be in Scotland.

I got married! Well, I was already married, but my husband and I had a public ceremony and reception, so we threw a big party and everyone watched us so lovely things to each other. It was very nice, sorry we didn’t see you there!

Our show is a loving prequel to Harry Potter following Tom Riddle as a teen before he became He Who Must Not Be Named. It was written by Zach Reino, Fiona Landers, Richie Root, and Scott Passarella, all great friends of mine, and I saw their show a year ago and loved it and thought “I want to bring this to Edinburgh”. It did show in LA before and it sold out, and after Fringe we’ll be doing it again in the US and also licensing the show out if UK companies want to put it on.

They should see as much circus and magic as possible, and then see Baby Wants Candy (which I’m also performing in) and then go see a random show that you have no idea about! And then go see Jordan Brookes, who I saw for the first time last year and loved! 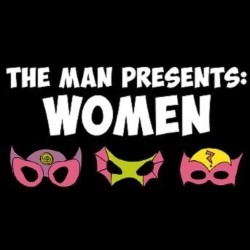 “It’s crazy that now I’ll get to be wearing the passes that I spent lots of my first year printing!”

WHAT: “What happens to the women that men can’t write? In this showcase of strong female characters, a group of Cambridge’s finest lady and non-binary comics will endeavour to find out. Fresh from every screen and stage ever, the cast-offs, the sidekicks, the nonspecific love interests and the straight-up plot devices come together to stick it to the man. Specifically, one man in particular. Their writer. With multiple women actually allowed on stage at once, who knows what might happen? Starring female members of the Cambridge Footlights and more, we wager it’ll be something very, very funny.”

This is the first time ‘The Man Presents: Women’ is hitting the Fringe! It has previously had three sell out runs in Cambridge, but now we’re ready to take on THE WORLD (starting in Scotland).

I (Ania – director) have been up to Edinburgh every year for three years now, and my first experience was as a reception intern at Assembly. It’s crazy that now I’ll get to be wearing the passes that I spent lots of my first year printing!

‘The Man Presents: Women’ achieved its third sell out run in Cambridge, with a brilliant new cast and five star reviews.

The show was conceived by Molly Stacey and Kat Weaver (who are now working on the Footlights Tour Show) last year. Since then it has been passed down to myself and Emmeline Downie (performing in a sketch show called ‘Manhunt’), for its first Fringe run.

The show is opened by ‘The Man’ (a drag female act), a writer who has decided that women have been marginalised for too long. His cure for this is to write a variety of ‘three dimensional’ female characters himself, giving women their much needed voice (from a straight cis man). The majority of the show is a series of character comedy monologues performed by ‘the women’, parodying and reclaiming tropes of female characters in films, literature and wider culture.

The Man Presents: Women uses ‘very well written humour to address an important topic in a funny and light-hearted way’ (The Tab). The idea for the show was birthed out of the observation that even when women are cast in a ‘comedic’ role, they are often not funny at all.

Each monologue is written by the performer, however the process has been extremely collaborative which enables us to foster a broad sense of humour. We hope this is only the beginning for our journey at the Fringe!

I could go on for absolute hours. I have to start with Emma Sidi’s show ‘Faces of Grace’. Not only is she a stellar character comedian, she is also an ex-footlight and an inspiration for the cast!
There are plenty of other funny women not to be missed: Kiri Pritchard-McLean, Olga Koch, Rose Matafeo and Jayde Adams to name a few.

And if stand up is your thing, I am doing a split hour at 3pm in Tolbooth Market for a sweet £0!