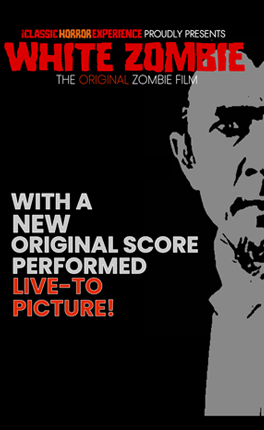 “I think festivals that manage to have a particular spirit but also provide a variety of unexpected experiences are great, and this one certainly does!”

This is indeed my first time. I’ve been aware of Bedfringe for awhile now and really looking forward to being a part of it – I think festivals that manage to have a particular spirit but also provide a variety of unexpected experiences are great, and this one certainly does!

I don’t know if I’ve ever absorbed any lessons at any time, to be honest, but I’m certainly still trying! In general, I’m being out in the world now, both personally and professionally – after a long period of creating things by myself that were meant to seen and heard by other people eventually (often under the lightbulb while much of the world is sleeping), the time has come to actually have them out there, which is pretty fab.

It’s the past meeting the future in an evening of classic horror! – The main event is a screening of the 1932 gothic horror film White Zombie, starring the inimitable Bela Lugosi, accompanied by a new original score performed live-to-picture by me. Lugosi’s performance is great (I personally think it’s even better than Dracula, which he’s most famous for) and it’s got great sets, great zombies, great costumes. It’s big and over-the-top, and lots of fun, and it’s been great making a new score to go with it.

And – as if that weren’t enough – there’s also a opening short film called ‘The Vampire Bat’ (also with new music) and some scenes from a documentary about Bela Lugosi that I scored, so you’ll have definitely gotten your fill of classic horror this evening.

Well there’s just so much to see for whatever mood you’re in – being a bit of a one-man-band when I need to be, I’m mighty interested in ‘War Of The Worlds’ (on a budget) and Dave Alnwick’s Nightmare Magic.