“This is edgy and very funny stuff, delivered with self-deprecating wit that invites much laughter”

There is no shortage of stand-up comedy at the Fringe these days, which is rather taking over from theatre. This production (and I think that’s the right word for it) comes somewhere between the two. Kylie Vincent takes the stage as a feisty in-your-face young comedian, opening with some funny if fairly conventional observation about being an American in Edinburgh.

But we quickly realise there’s going to be more to this act than meets the eye. The traditional relationship trope of performer and audience is exploded by her analysis of a heckle she received at a gig in New York – to which we listen on audiotape – before this leads her off into a revealing and confessional exploration of her self-image and personal life. The usual idea of a comic making wry observations about the world we all share is abandoned as we are drawn into the sometimes dysfunctional and abusive world of her “white trash” family upbringing. This is edgy and very funny stuff, delivered with self-deprecating wit that invites much laughter – but I noticed there were several highly introspective episodes when there was scarcely a giggle for some minutes as the audience were raptly absorbed in listening to stories that were a little too painful for amusement. Jerry Sadowitz this ain’t – and I mean that as a compliment.

The eponymous “Bird” is Kylie’s name for herself. She sees herself and others as metaphorical animals, with other friends and family referred to by names such as “the deer” or “the gazelle”. Tellingly, all of the males in her life are monkeys or apes, with her father being “the gorilla”. Although a fine emotional rollercoaster of a show, I felt that overall it fell a little too far down between the two stools of dramatic monologue and stand-up comedy to be an out-and-out success in its current form. But Kylie Vincent is someone to watch: this combination of misery memoir and wryly observational humour felt like a work in progress that has much potential and I suspect we’ll be hearing more from Ms Vincent in years to come.

So come for the laughs, stay for the heartbreak, and leave thinking a little more about the ups and downs of your own family life. Get your coats on and go see this emerging new genre of tragicomedy. 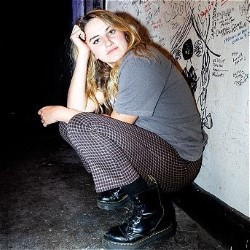 “I think a new Kylie will come out of this and will make me a stronger person and performer with the learning curve of balance.”

WHAT: “How does a queer, GenZ comedian survive her past, the pandemic, and the indignities of a stand-up career? Vincent (aka Bird) takes the audience on a (seriously) funny flight, often through taboo comedy territory. Audiences say Vincent is a ‘badass, punk rock, hilarious’ storyteller and Bird is ‘…emotional, dark, and funny! Go see Bird!'”

Yes, this is my first time at the Fringe! It is so special because I have never cried this much in my life. Just kidding, but not really. It’s amazing that I get to consistently do my solo show everyday, on top of doing stand-up sets on other people’s showcase. To see great art everyday and be surrounded by that is definitely special and some people don’t even get to experience in a lifetime. It’s hard to be a person here since you’re constantly working, I think a new Kylie will come out of this and will make me a stronger person and performer with the learning curve of balance.

In my show, I talk about my childhood sexual abuse and in 2019 I had not told anyone about it. In 2020, I started working on my show and it became a huge part of my identity. I think I’ve learned particular strength in identifying and feeling supported a part of an art and survivor community and that there often is freedom in letting that go and putting it into your art. I’ve also learned that I am addicted to chickpeas. I’ve lived off of them, like there’s a shortage or something. The other night, I fell asleep with a can of chickpeas and a fork in it next to my pillow and I woke up and rolled over and was shocked. I said to the chickpeas, “did we…?”

I wrote my solo show! Barbara Pitts McAdams is directing & producing, and we also have David Calvitto on, co-producing. I met Barb about 4 years ago when I was advocating for gun control at a rally when I worked for the organization March For Our Lives (a non-profit gun violence prevention group). Barb is with Tectonic Theatre Project which creates activist devised work, like The Laramie Project, and at the time was working on a play about gun control activists. She interviewed me, we hit it off, and I started working on projects with her. She became sort of a mentor to me and when I was working on my show Bird, I sent her an early draft for feedback and she took interest in the piece and said she would like to produce and direct it. She also brought David on to help us with the Fringe run, as he’s been to like 17 Fringe’s total or something like that? I don’t know he’s old and it’s a high number.

Sam Morrison’s show “Sugar Daddy” such a hilarious, beautiful solo show. Sam is also a NYC comedian and is very well respected in the comedy community, but was blown away when I saw his show out here…his ability to make you laugh until you cry and then you actually cry, is so special and I highly recommend it.

Lucy Hopkin’s “Dark Mother” is an experience and I would do no justice explaining it if I tried. Such a fearless, talented, spiritual artist.