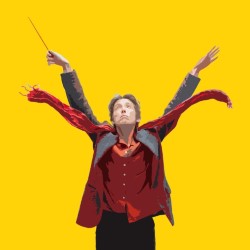 “I love discovering bizarre and inspiring work that defies genre – it feels like it re-inspires and reinvigorates your own creative juices.”

WHAT: “#MakeMusicGreatAgain. You are the orchestra. Boorish Trumpson is your rehearsal-conductor. Just your rehearsal conductor… just for one rehearsal… absolutely no other ambitions. None. Nope. ‘Fantastic performance’ **** (TheWeeReview.com). ‘Irrepressible’ **** (List). ‘Hilarious’ **** (FeministFringeReviews.wordpress.com). ‘Phenomenal’ (Chortle.co.uk). ‘A Masterpiece of a chef-d’oeuvre’ ***** (Boorish Trumpson). An interactive, music and clowning-filled interrogation of power and those who wield it from critically acclaimed Lecoq-trained clown Claire Parry.”

This is my 5th time as a performer! I first came in the year after uni, then returned with professional ambitions in the interactive, immersive show Eden Gate (I’m going to say it – a cult hit. I’ve never felt so mildly famous). Then a few years later I came with my first professional solo show Intolerable Side Effects and now I’m back with Boorish Trumpson for the whole run after doing just a week last year! I’ve also been twice as a punter for the weekend – definitely the more relaxing way to do it compared to keeping on top of all the admin, ticket sales, flyering and performing. But I keep coming back for more! I think my favourite thing about the fringe is how many brilliant and completely unique shows you can see whilst up here – it’s the reason I dared to train in physical theatre (arguably still not a financially viable career choice…) and I love discovering bizarre and inspiring work that defies genre – it feels like it re-inspires and reinvigorates your own creative juices. It’s also amazing to meet so many artists, especially as a solo artist who usually sits at home alone…

In 2019 I did in two shows a day, including all the production and marketing for one and a lot of flyering. It took quite a toll on my energy and I don’t think I was always in the best place. Last year when I was there for just a week flyering was banned – it was AMAZING. It took so much pressure off and I felt so much better before performing each show. This year I’ve put budget aside to get a flyerer to help me out – I’m figuring out my limits and what putting on the show realistically costs rather than thinking I have to do EVERYTHING and not pay for anything. The other amazing thing – I treated myself! With my fave honey, lemon and ginger drink before each show! In 2019 I would have considered that a frivolous no no (I’m on the extreme end of ‘self-disciplined’ when it comes to not spending money). I think I’ve learnt that actually there’s a balance and it’s important to allow myself to spend on what is going to keep me healthy as a performer, both mentally and physically for the month. I’ll still be having packed lunches though…

Boorish Trumpson is a mad clowning and music filled solo show about a power figure who’s after power for power’s sake over principles but transposed into the world of an orchestra. Boorish Trumpson is the rehearsal conductor on a power grab and the audience are cast as the orchestra – it is very interactive and the script is full of verbatim Boris Johnson and Donald Trump quotes in a bit of send up of these types of leaders whilst the political questions rumble underneath – how complicit are we in their rise?

I wrote it following seeing my mum’s community choir concert – I thought the conductor looked so funny and so powerful conducting all these different groups – it felt like a setting ripe for adding in a bit of physical theatre and political satire! I have also been helped immensely by my dreamy dramaturg/co-directors Alex Prescot and Lily Levinson, clown extraordinaire Lisa Berg and my sound designer Fizz Margereson – they helped me devise the piece in the room (following several months of mulling and failed funding applications…which at least helped clarify my ideas!) and offered brilliant feedback following WIPs to help it grow. I brought the team together as I’ve worked with them all before and really wanted their combination of skills on this project. Following the fringe I’d love to tour Boorish Trumpson – no specific plans yet but I’ve invited industry along to the show to kickstart plans. I’m ready for a chat, programmers…

Oh there are so many shows I’m excited to see!! Clem Bogg-Hargroves is brilliant in SKANK at Pleasance – the laughs and the feels all at once. I am very excited for Jo Griffin, People Person, too – she’s doing a solo show for the first time following many years at the fringe as an amazing sketch duo. I have also been waiting since 2019 to see Ryan Lane’s solo show Will Be There Now In A Minute – I’ve heard his characters are brilliant and he won the Soho Rising award. It All by Cameron Cook is also an absurd and completely mesmerising piece of solo theatre that needs to be on your list. So looks like I have a thing for solo shows…and a final one for that list is the hilarious Frankie Thompson clowning around in Catts! I’m also very excited to check out Runesical by Gigglemug, who also wrote the brilliant and v funny Timpson the musical! There’s 8 whole people in that one I think. And finally, if I were a child (which I basically am) I’d see Strictly Come Barking by Jon and Ollie who are hilarious. A family show which I will be taking my fringe family to see.