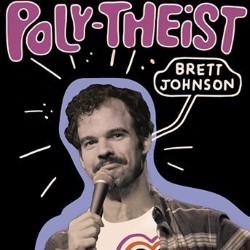 WHAT: “Brett was a 21-year-old, married, monogamous Evangelical. Then he became the opposite. After sell-outs across the US, stand-up Brett Johnson’s show about (non)monogamy, God and KFC hits the Fringe. ‘A uniquely poignant story, with humour and deep sensitivity… a thought-provoking and ultimately inspiring tale’ (PortFringe.com/Reviews). ‘Boundless charm… the definition of more-than-meets-the-eye’ (PGHintheRound.com).”

WHERE: Just the Tonic at The Charteris Centre – Just the Crypt (Venue 393)

I visited when I was a little kid, and I came to the Fringe for few days last year to get the lay of the land (mostly to acclimatize myself to the Scottish accent).

Premiering this damn show and bringing it to about a dozen cities across the States. I also correctly used the manual paper feed on a printer, first try.

The tagline is that I was a married, 21-year-old monogamous Evangelical, then I became the opposite: it’s a true solo comedy show about faith, non-monogamy and KFC. Edinburgh is the show’s international premiere and my EdFringe debut. I plan to take it to more cities in the US after August but also – hopefully – to some spots around the UK late 2019 or 2020!

After my show to go Calton Hill and take in the view, I hear it’s killer. After that: Jamie Loftus who is absurd and great; Mike Lemme and Sam Morrison who are both funny and just good dudes, Molly Brenner who’s worked her tail off on her show, and Kyle Legacy, who’s unwell but a sweet boy.