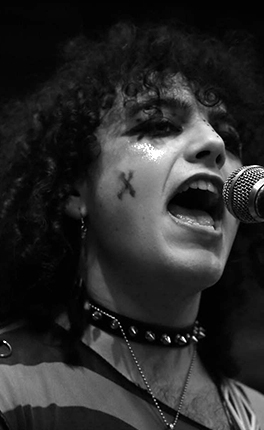 “The main difference between playing a festival and just going to one really comes from being backstage and seeing all the work that goes on behind the scenes. Plus there’s more chance of you sharing a mirror with the other performers when they know you’re not just trying to get their autographs and bags.”

WHAT: “Coor Brow-Obles is a South-Eastern UK based alternative musician and secret fantasy you can’t tell your partner about. Multi-instrumentalist and producer, noted for his pure voice, intelligent lyrics, strong stage presence and devilish good looks.

With Inspiration from artists like David Bowie, Placebo, The Cure, Still Corners and Björk, his music is constantly evolving and exploring the boundaries of alternative pop music.

Performed in full gothic glam attire and with some audience patter in between.”

It is and I’m very excited to be part of it! I know a lot of great talent has performed here including Lee Nelson, James Acaster and (my personal favourites) Aunty Donna. It’s going to be a lot to live up to. Still, if I can’t be as entertaining as them, at least I’ll be safe in the knowledge my eyeliner will be on point.

The main difference between playing a festival and just going to one really comes from being backstage and seeing all the work that goes on behind the scenes. Plus there’s more chance of you sharing a mirror with the other performers when they know you’re not just trying to get their autographs and bags.

I’ve learnt that Brood X cicadas only come out of the ground to breed every 17 years. This year however there’s a lot of them being infected by Massospora cicadina, which is confusing a lot of the cicadas into thinking they are opposite genders and rotting off the back half of their bodies. Neither of which has prevented their breeding cycle. Horrifying.

Also if you put your music on the internet some people might actually enjoy it. That was the biggest shocker.

I label myself an alternative singer/songwriter as I’m not exactly Ed Sheeran with my song choices and performance, but it is just me and an acoustic guitar. Musically, I am more inspired by 80’s pop, post-punk, ethereal and dream pop. David Bowie, The Cure, Still Corners, Voltaire, Placebo, Joy Division etc. Anything that can create a mood.

That said, I like to incorporate a lot of crowd work into my show. It’s almost as much of a stand-up comic show as it is a musical performance. If you’ve only come to listen to music you might as well just buy the CD. An audience is as much a part of a show as the performer and should feel welcomed. There’s nothing worse than a performer who can’t even look at an audience let alone talk to them past “My next song is...”.

Personally I looking forward to seeing Thomas Benjamin Wild Esq the most. I’ve really enjoyed his performances on youtube.

I’m really interested in the ‘Twas a dark and stormy night poetry act, which has received a lot of great reviews.

I may take part in the Stevie Vegas Circus Skills workshop. I already have some experience with Devil sticks, so it’d be nice to add to the repertoire.

Also Debra Kedabra looks right up my street. Magic and Drag looks like a winning combination. I wonder if they’ll lend me their lipstick…