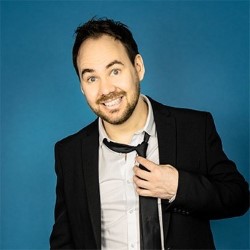 WHAT: “Award-winning comedian, writer and co-creator of Comedy Central’s Modern Horror Stories, Daniel Audritt brings his much-anticipated debut hour to the Fringe. Having previously written for 8 Out of 10 Cats Does Countdown, Mock the Week, Comic Relief, The News Quiz, Dead Ringers, NewsJack and many more, the show will be punchline-heavy stand-up comedy show that questions love, relationships, modern masculinity and what it takes to be a good guy. Dave’s fourth Best Joke of the Fringe 2018. ‘A winning wit’ (Bruce Dessau, BeyondTheJoke.co.uk).”

This will be my 5th time at the fringe, but my first time doing an hour show on my own.
For two years I performed in a tent in the middle of the Free Sisters. The “venue” was the worst – so much so that I don’t think it counts as a venue any more – but I loved it, which is why I went back two years on the bounce. The whole tent would flood if (and when) there was rain, it had a busy road on one side and a beer garden that played the football on the big screen on the other. At least a few times every day I’d think “what am I doing here?”… but then every time I did a gig in an actual venue, it felt so much easier than it used to. I guess when you have an audience that can hear you clearly and aren’t worried about leaving with trench foot then they become an easier crowd…

The biggest thing that has happened to me was last year when I was doing my work in progress show. I thought I was keeping myself off the radar, but then one of my jokes came 4th on Dave’s Best Jokes of the Fringe. That was pretty crazy.

Daniel Audritt: Better Man is a stand-up show about Love, Relationships and Modern Masculinity.
I thought I’d learnt everything I ever needed to know about life from 90s rom-coms but then I found myself in a relationship that I hope will last and have been forced to question everything. In the show, I will explore what it means to be a better man in 2019 – taking a look at everything from Toxic masculinity to the aggressive language on my moisturiser.

Edinburgh will be the show’s official premiere – I’ve been previewing it this year and developing it around the country on basically any stage (and often there wasn’t actually a stage) that people would let me tell jokes on. I’d love to tour the show afterwards, but let’s see if I get through Edinburgh first shall we?

It’s hard for me to choose one, so here are 4 that I’m really looking forward to…

Stand Up with Janine Harouni (Please Remain Seated) – Janine is a seriously good stand up and was part of the cast of Modern Horror Stories, my Comedy Central show.

Northern Power Blouse – Touching Cloth – A silly, over the top sketch show. Also, my writing partner is in it, and she’s the funniest person I know.

Emmy Blotnick: Party Nights – Great stand up from the US. I heard this album a few weeks back and it was great, I’m really looking forward to seeing it live.

Anna Drezen: Okay Get Home Safe!! – Another US comic and writer. She used to write loads of the Reductress’s best articles, now she writes a lot of SNL’s best sketches. I’m looking forward to that one.