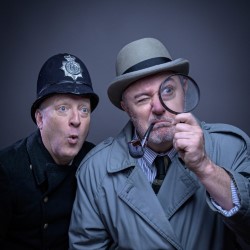 “We never want to retire. Our industry didn’t exist for 2 years. There’s so much to catch up on.”

WHAT: “The Great British Detective tradition! Holmes and Watson meet Poirot and Miss Marple (alongside the usual suspects) in a spoof homage – who murdered Lady Fanshawe!? Why have the sound cues got mixed up? Where’s the set? Made all the more tricky, given that four actors are stuck in the broken-down van, so theatrical knights, Sir Gavin of Robertson and Sir Nicholas of Collett attempt to deliver the play… what can go wrong!? Brand-new comedy, re-interpreting The Art of Coarse Acting with a farcical result. Time to discover whodunwhat and how… Warning: Contains hats!”

We first came to Edinburgh together in 2010 to perform “The Six-Sided Man” at Zoo. We returned in 2016 to perform the 30th anniversary version at Assembly Roxy. Prior to this Gavin was at Assembly with “Thunderbirds FAB!” in 1987, prior to the first of 6 West End runs. Since then he has appeared in many Fringe productions including “12 Angry Men” with Bill Bailey and a host of comics and “One Flew Over The Cuckoo’s Nest” with Christian Slater and Mackenzie Crook.

Nicholas’s first fringe was in 1980, performing new writing from the University of Birmingham Drama Dept with fellow students including a young man named Simon Le Bon. No idea what happened to him, he seemed quite interested in music. Since then he has twice appeared as Counsellor in “The Black and White Tea Room at Assembly (Special Performance Award at Seoul’s World Duo Festival) and “Your Bard” amongst many others.

We love doing Edinburgh – you have no idea who’s coming and the doors that may open as a result are exciting. Through Edinburgh we have both presented work internationally, including Hong Kong, Brazil, Korea, Japan, Adelaide, Kansas City and Florida.
It’s great meeting people from all over the world.

We never want to retire. Our industry didn’t exist for 2 years. There’s so much to catch up on. We took the view that people would want to have a laugh after all this, so we’ve made a comedy. People seem to like it so we’ve learnt that works.

Created, performed and produced by Gavin Robertson and Nicholas Collett. We met in 2007 through Tim Marriott on a production of Dante’s “Inferno”. We started making work together shortly after. This production has been touring since 2019 and will be touring the UK this Autumn, including a visit to Florida.