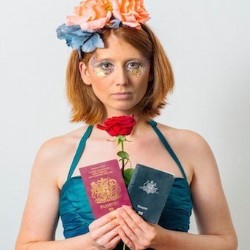 “The show’s a heart-stopper. You’re going to be swept up in the magic of it all, but the rug is also going to be pulled from underneath you.”

WHAT: “In Brexit Britain happily ever after (and UK residency) is just a marriage visa away. But Australian Alice’s visa expires today and she’s only got Primark flats for glass slippers, an Oyster card for a pumpkin coach and a prince who won’t twerk. Love, Alice thinks, is a fairy tale. Visa-less and forced to return to a country she doesn’t call home anymore, she waits at the tube for Prince Charming to rescue her. Alice quickly learns love changes people and childhood stories have no place in the adult world. Created by Malcolm Bradbury Award winner Michelle Sewell.”

It’s the first time I’m bringing a show that I’ve written and performed in. Last year I came up on a StartEast mentorship programme working with British Showcase productions Rhum & Clay’s Testosterone, and had worked on Curious Directive’s Frogman.

Although the first time I ever performed a show at the Edinburgh Fringe was when I was eighteen and it was my first year in drama school in Sydney. I was chosen to be part of this show where I only had like two lines. Now I have fifty minutes to myself. I guess I have a lot more to say now. Haha!

Finding out that I can’t renew my visa at the end of the year. That was a shock (to say the least…). It gave me the impetus to write this show and it has actually made me appreciate my life in the UK a whole lot more. It’s also made me consider that tear between your home home – being Australia for me- and my home – being Norwich in England. I’ve also been thinking about Tim tams a lot more than I probably should be.

The show’s a heart-stopper. You’re going to be swept up in the magic of it all, but the rug is also going to be pulled from underneath you. The director, David Gilbert, has done an awesome job in building the show into a really enjoyable theatrical piece of drama.

I wrote the piece which started as a three minute performance with SOHO and The Barbican’s Stage at the Walthamstow Garden Party. This then became a five minute journey with Cambridge Junction, Vaults Festival and the Lyric Hammersmith. Now it’s a 50 minute Beast of a play. We’ve previewed at Theatre 503, Cambridge Junction and Norwich Arts Centre. This has been such an incredible experience being able to take the show across the UK.

We’re hoping to transfer it to Adelaide Fringe next year then West End (a girl can dream, yeah?).

Oh goodness, there’s so so many kick-ass shows this year. I would definitely say Weird and Dangerous Giant Animals- two one-woman shows that deal with disabilities, which I think are just going to be beautiful and stand out this Fringe. There’s some really great shows from our Norwich friends, Laughing Mirror, who are on at The Space- definitely go check them out! And F*ck you Pay Me at Assembly.