The Edinburgh Quartet are one of our favourite live music acts here at Edinburgh49, and while normally it’s my colleague Charles we defer to for his superior knowledge of classical music, I was interested to see how a collaboration with Youth Dance Scotland would work, and what unexpected gems might be uncovered when combining classical music with contemporary dance.

The evening commences with a traditional musical performance by the quartet, followed by three dance/music collaborations: all original compositions for the quartet, and with original choreography from Marc Brew.

The first of these, For Sonny captures a very childlike and playful feel, with the dancers darting in and around the musicians (who are positioned centre-stage), seeming to make the rules up as the go along. There’s an element of give and take to the piece as the dancers respond directly to strokes from the quartet in the quieter elements, and to movements from each other – as if playing a rather bizarre version of “follow the leader” throughout. It’s fascinating to see such a close relationship between the dancers and the musicians, even though the danger of collisions sometimes causes the heart-rate to rise somewhat!

The quartet move to the side of the stage for the final two pieces, yet still feel integrated within the performance as the dancers watch and respond to them throughout. The second piece feels just slightly more grown up as the dancers adopt a more uniform and unison approach to their movement, though they become more animalistic – like a set of production line workers in rebellion against the formality of the everyday. Different dancers take turns to break out from the group, using more and more of the space, until they surround the quartet at the end, as if waiting for their next direction or inspiration.

Silent Shores has a significantly more ensemble feel, and combines the best of both of the previous two pieces, with some daring lifts and tableaux in direct response to the music, following its stops and starts with playfulness and control. Reflecting the nature of the isle of Arran, it’s a complex interrelationship as the different aspects of the piece – contrasting stillness and frantic movement – bring about a sense of ongoing time and flow, like the changing of the seasons.

Overall what’s most pleasing about the whole setup is the relationship between the dance and live music, which is cleverly structured and choreographed to integrate the two. At times the movements did lack a little polish and finesse – but perhaps given that the piece is touring across different venues in Scotland for just one night at a time, it can be expected that the dancers will have to adapt to the size and shape of their performance spaces each time, not allowing them to fully relax into each performance.

Something for both dance and classical music aficionados, a real treat. It’s a shame that, at just shy of an hour, the performance is so short. 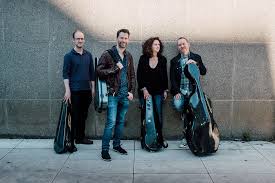