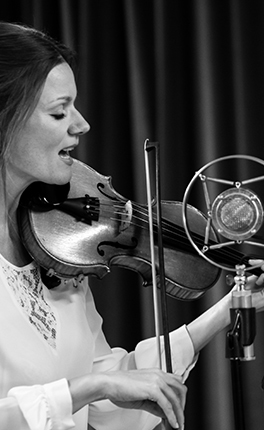 “We’ll be performing mostly songs from our 2020 debut album, “Northern Shores & Stories”. It’s a concept album based on the North Yorkshire coastal town of Whitby and the surrounding area.”

WHO: Griff Jameson: One half of the duo

WHAT: “Elizabeth & Jameson is an award-winning collaboration comprising two rising stars of the UK acoustic music scene.  Fresh from opening for Jools Holland and his Rhythm & Blues Orchestra as official support act for part of their 2019 Autumn/Winter tour, the duo are currently gearing up for the spring release of their debut studio album, Northern Shores & Stories.

Hannah Elizabeth and Griff Jameson have joined forces to create an indie-folk sound which encompasses both their individual musical backgrounds of traditional folk-roots and folk pop/rock.  This is simplistic, classic song writing at its best – a stripped back harmony-driven sound with acoustic guitar, violin, accordion and exquisite harmony vocals.”

As a performer, yes! We’re former residents of Bedford and loved enjoying the music in the garden of the Quarry Theatre in previous years! Had some chums play out there and loved the vibe. We always wanted to do it but the dates always clashed with other bookings so never sought it out….but this year….sadly when we’re no longer Bedford residents….We can do it!

Hahaha! Well we are all always learning right?! I think, on a practical level at least, we’ve certainly become alot more savvy with tech, what with having to do so many remote shows and interviews from our front room!

In all seriousness though, I think it teaches you to never take what you do for granted. We are so lucky to travel around and perform in all corners of the UK so regularly…..the idea that that normality is just around the corner sounds like a dream!

We’ll be performing mostly songs from our 2020 debut album, “Northern Shores & Stories”. It’s a concept album based on the North Yorkshire coastal town of Whitby and the surrounding area.

We were lucky enough to release it on it’s original planned date (although sadly the tour to co-incide with it fell by the wayside) and got some great reviews and airplay on a national level!

We invite the audience in to enjoy the history, tales and characters from the album….as well as a few more familiar covers to get everyone singing along!

Just saw Danni Nicholls is on for the Blender Takeover! I shared the bill with her several times with my former band. She has a phenomenal voice and self penned songs to match!