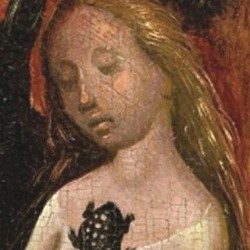 “So yes I do believe theatre can have an active role now. We are at a crucial point in our civilization.”

WHAT: “A woman reveals her daughter’s terrible secret which only surfaces as the daughter becomes a young woman. The father is a well-known meteorologist who abused her own daughter. ‘In the dense poetic texture of the script there is a haunting vision of a world destroyed by patriarchal attitudes taking some kind of watery revenge on the whole of humanity; including women like this mother, who collude with abusive men by somehow seeing and saying nothing, even when the truth is right in front of their eyes’ (Joyce McMillan, Scotsman).”

Yes, this is my first time and I am really looking forward to being in such an international theatre community.

I am also aware of the huge competition, but my show speaks about topical issues in a quite provocative way. Audiences have reacted positively already, especially young public which makes me particularly happy.

In the last twelve months, working on FATHER has been most rewarding and we received critical and public success when it previewed at the Tron Theatre in Glasgow in April. I’ve also presented a companion piece MOTHER, an installation performance piece, at the Contemporary Museum in Naples – it’s known as Mother as well, and world-renowned; I’m developing two feature film projects and I’m writing what will be a very provocative book about Michelangelo… it’s been an extremely busy and productive year!

I wrote it and I am directing and performing the play. The producer is Ipazia production, a new company created by a friend of mine. We have opened with a preview in Glasgow at the Tron theatre in April 2019 and had really positive reviews. I am aiming to take this play around the world.
I started my theatre career in Chicago and New York city where plays of mine have won awards. So naturally, these two cities are in my heart as well as many cities in Europe. I lived in Paris for many years and worked as director of documentaries in Europe and South Africa. I’d love to take the play to Cape Town and Johannesburg to the Baxter and the Market theatres.

FATHER, is a one-woman show and carries a message. It’s based on a friend of mine’s real experience and it’s an intimate work with mythical scope, where the personal experiences of the child and parent are reflected in our wider relationship with Mother Nature and the evolving tragedy of our climate. In fact, when my friend was telling me her story I immediately envisioned a wider perspective. The father here is also a well-known meteorologist who is aware of climate change. He wants to save the Earth: he believes Man is the cause of the disaster; therefore Man should be the solution. He is lost in his own delusion because he was the first to commit a crime having abused his own daughter. So multiple layers of storytelling give to this play a strong metaphorical meaning. I believe theatre to be the only place where in the dark you are confronted with another human being’s feelings in that precise moment. No technology. This is so vital for getting in touch with our deeper emotions.

So yes I do believe theatre can have an active role now. We are at a crucial point in our civilization. Many people do not realize how dangerous the situation we are living in is, even if many scientists are more and more alarmed. But as my meteorologist says in the play: ‘ What if they are using us as a cover? They send us on television…they let us having conferences…but what if no one of them cares?’ And this is definitely what people in the world are start thinking about the decision makers and who is behind them.

There are some fantastic shows at Greenside – the venue in which I’m performing – I will see Hitler’s Tasters – like my show, based on a true story – about the young women who were given the honour of checking that Hitler’s food was not poisoned – the patriarchy at work again … Ontroerend Goed I’ve heard great things about and their show Are We Not Drawn Onward to a New Era is looking at the future for humanity. I’m intrigued by Cardboard Citizens’ show Bystanders – about the shocking experiences of homelessness, which, again, is based on true stories.

There’s other artist too that are tackling the issue of climate change: Sam Haygarth: Climate Crisis, David Finnigan’s You’re Safe ’Til 2024, BoxedinTheatre’s Daphne or Hellfire… considering where we are right now, I’m surprised there aren’t hundreds of show about what’s happening to our planet! I am looking forward to discovering new, radical artists, making work that asks questions and deals with where we are now at this point in human history. I’m looking forward to the sheer scale of creativity that Edinburgh offers in August and I’m looking forward to exploring the City’s architecture, galleries and hidden corners.