“The flamboyant style and innuendo-laden patter had the audience shrieking with laughter from the outset. “

The programme note “Includes scenes of a sexual nature” is putting it mildly for this hilariously raucous and bawdy romp. Based on a book of the same name by Dan Anderson and Maggie Berman, it comes to the Edinburgh Fringe after productions in Las Vegas and Off-Broadway New York. Not for the shy or straight-laced, the tips of the title are presented as a step-by-step guide to sex in the format of a scholarly presentation that quickly escalates into something like Love Island-style reality TV or an X-rated late-night quiz show.

At the centre of the action is Dan, the “Gay man” of the show’s title, played by Adam Fane, who hosts the evening like Graham Norton on acid and is camper than a field full of tents. His flamboyant style and innuendo-laden patter had the audience shrieking with laughter from the outset. His foil is Robyn, a bookish ingenue who vainly tries to sustain the pretence of an academic seminar amidst an onslaught of dick jokes and phallic symbols. While we’re on the subject of the penis, come prepared to volunteer a nickname for the male pudendum to be used for the rest of the show. I heard the audience propose everything from the workaday “knob” to the exotically suggestive “beef whistle”, but the one we ended up with was “Ever-Ready”. The third cast member is Bradley Allen Meyer, who plays Stefan the stage manager. Something of a stud who clearly excites the interest of Robyn. Stefan is used as a life model and stripper for some of the tips demonstrated.

Things were cranked up another notch when a little more audience participation saw three brave ladies take the stage to mime various arousal techniques under Dan’s instruction. This greatly excited the other women in the audience including my wife – normally a presbyterian sort of lady – who started fondling me in a way she hasn’t for a wee while. Dan whipped things up even further to whooping hysteria when we were invited to mime something – modesty forbids me from saying what – using our rolled-up programmes. At this stage my wife giggled: “This is like a Hen night in Blackpool!” (And she told me she was going to a conference…)

This ribald laugh-out-loud show is an absolute hoot. The large auditorium was nearly full when I was there and I can only imagine things getting even busier as word gets around. So come for the Sex Tips, stay for the laughs, and leave with a few nifty ideas to buck up your love life. Get your sexiest coats on and go see this! 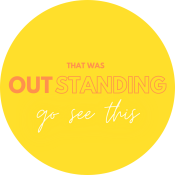 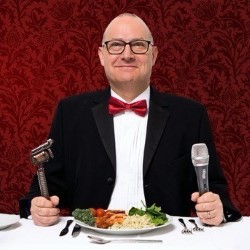 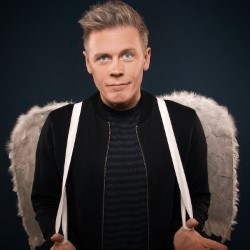 “When I tell New York comedians I’m doing Fringe, they react with a mix of confusion and fear.”

WHAT: “Christian Finnegan is a stand-up comedian, exploring what it means to be a passable human being in 2018. Perhaps best known as one of the original panelists on VH1’s Best Week Ever and as Chad, the only white roommate in Chappelle’s Show’s infamous Mad Real World sketch. He played Martin on the popular syndicated sitcom Are We There Yet? and politics junkies will recognize Christian from his many appearances on Countdown with Keith Olbermann. Most recently, Christian was the creator and co-host of A&E’s Black and White.”

This is my first Fringe, so I’m excited and daunted in equal measure. When I tell New York comedians I’m doing Fringe, they react with a mix of confusion and fear—as if I’d said I was going to scale Kilimanjaro or wrestle a grizzly bear. But who knows how long it will be before America is locked down in some sort of police-state dystopia, so I figure the time is now!

I’ve been a club comic here in the States for over 20 years, but MY GOODNESS has more meat on the bone than anything I’ve done in the past. The show took shape when I noticed that my standup material was starting to dance around a central theme–basically, “What does it mean to be a good person?” So I wrote some connective tissue stuff around the more polished material, added an interactive element, a bit of tech, etc. I’ve been workshopping the show in New York over the past few months and the training wheels are finally ready to come off.

I’m rooming with fellow American Myq Kaplan. I haven’t yet seen his show ALL KILLING ASIDE, but he’s known as one of New York’s best and most inventive comedians and he’s a fantastic person to boot.

Also, I once spent a month driving around Western Australia with Zoe Lyons as part of the MICF Roadshow, so I’m really looking forward to seeing ENTRY LEVEL HUMAN.

And one more: I think he’s only in town for four days, but everyone should make an effort to go see Judah Friedlander. World Champions only come along so often!