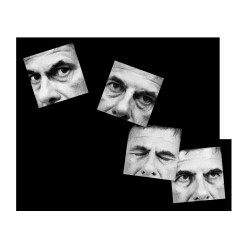 “I have had personal experience of male mental health problems and know the isolation and anxiety it can cause amongst family and friends, male and female of those affected.”

WHAT: “From award-winning director Benet Catty, this one-man show examines the ‘unseen’ illness of male mental health through the eyes of four different male characters, coping day to day, when an unexpected trauma sets the picture unraveling. Writer Sally Lewis, who scored a hit at the Edinburgh Festival Fringe 2016 with How is Uncle John?, returns by popular demand with an equally sensitive take on an overlooked subject, inspired by real life stories. All four characters are played by master of the monologue, actor Neil Gwynne.”

I made my Fringe debut in 2016 with ‘HOW IS UNCLE JOHN’, a powerful story about modern day slavery, but Ben Catty, our director, is a Fringe veteran having been here with 6 plays,of which three won London Fringe transfers and four featured on multiple Critics Choice lists. Neil Gwynne, actor and master of the monologue makes his debut playing four characters in this one-man show.

For me its the opportunity to write this play and work with mental health charities such as Brothers In Arms Scotland to get male mental health out into the open and start the conversation. It’s been vital to me to see how men can find support and know they do not have to suffer alone, since Festivals ’17 I have had personal experience of male mental health problems and know the isolation and anxiety it can cause amongst family and friends, male and female of those affected.

Neil, the actor brought ben (the director) and myself (writer) together. Neil and Ben were old friends who went back to theatre school days, I was the newcomer. Neil already had an idea about looking at male mental health as a subject and we chatted. He had read my script for HOW IS UNCLE JOHN and liked the style of my work. Together we collaborated on what is now GLASGOW ’14. We had one performance back in Neil’s home town of Romsey and are delighted to say it went down well. We are all keeping our fingers crossed and hoping for a tour after Edinburgh.

They should visit the bar firstly. There’s nothing like a drink and a chat to let the play really seep into the consciousness. Then they should head off to see My Left/Right Foot – the musical, and the Underground Railway Game @The Traverse.