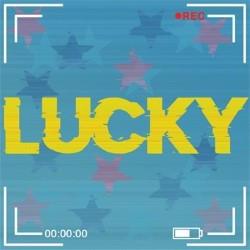 “We brought SIX up last year in its premiere, and LUCKY is our next musical new writing project.”

WHAT: “Lucy is young, fresh-faced and feeling lucky. She also just lost her mother. Propelled by contingency, she is sent to live with her estranged father, Lothario and long-time lad Ricky Pense, infamous for his problematic dating show. Coping with loss is never easy, especially when it’s televised for national consumption. In this new world of TV artifice, Lucy must struggle to retain integrity as the lines between life and ‘live!’ begin to blur. Lucky is a new musical from the Cambridge University Musical Theatre Society about reality TV and the performance of emotion.”

The shows called LUCKY, it’s about a young girl thrust into the world of reality television and how she navigates the experience, alongside the death of her mother.

The show’s written by Ash Weir and Harry Castle and it’s produced by Gabriel Humphreys. The company is Cambridge University Musical Theatre Society (CUMTS), we’re Cambridge University’s biggest musical theatre society and we produce musicals in Cambridge as well at the Fringe. We brought SIX up last year in its premiere, and LUCKY is our next musical new writing project.
Edinburgh will be LUCKY’s premiere and we’d love to take it further.

There’s a wealth of new musical content and we support and will be seeing as much as we can!
But also catch the professional version of last year’s production SIX! 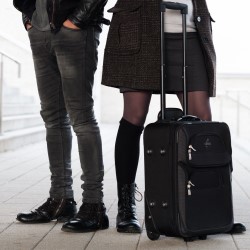 “Our productions explore the human condition in all its messy, humorous splendour.”

WHAT: “It’s 4am, you’re stuck in the middle of an airport, and you’re downing coffee to stay awake. You also suspect you might be falling for the weird, oddly familiar guy in the corner who seems to have a thing for iambic pentameter. Problem is, you’re going to Hong Kong, he’s going to Morocco and you have one hour until your flight is called. What do you do? J’n’R is a fast-paced comedy loosely based on the balcony scene from Romeo and Juliet. It may or may not be a love story.”

Yes it is. Despite lots of Scottish heritage (my grandfather was one, Donald McCallum Carmichael!) this is the first time I’ve had the pleasure of visiting Edinburgh. I can’t begin to tell you how excited we all are.

We launched our theatre company, Blue Goat Theatre, earlier this year which has been an incredible experience. We finally have a creative home, and have received so much support both from people here in Düsseldorf, Germany where we are based, and from abroad.

Blue Goat Theatre champions diversity and inclusiveness both on stage and behind the scenes. The creative team behind the company hails from three different countries so there’s always a rich mix of culture and ideas. Our productions explore the human condition in all its messy, humorous splendour.

I wrote this show in the wake of the Trump election and the rise of the #metoo movement. Like many people, I was looking for a way to make a contribution to the conversation. After a recent show one of our audience members wrote: “What a beautiful display of dismantling the patriarchy. This play is needed now more than ever.” Feedback like that reassures me that we’re on the right track. Come find us at the Fringe and we’ll give you one of our “F**K the Patriarchy” postcards. They’re pretty fab.

We premiered J’n’R in Germany in 2017 and have been refining it over the past year. After Edinburgh we’ll be performing back in Germany, but in German rather than in English which adds a whole new dynamic to the show.

They should definitely see Jimeoin: Result! Jimeoin is an an Irish/Australian comedian whom I first saw perform when I was at university over 20 years ago. Back then he was just a guy who was a builder during the day and doing the stand up comedy circuit at night. He was such a decent guy with both talent and integrity. It’s so cool to see what he’s achieved in his career. And his shows are hilarious!

I’d also give a shout out to the amazing shows performing at the Greenside Venues. There’s a great community spirit amongst all of the Greenside artists and Blue Goat Theatre is very happy to be a part of the family! Personally I’m planning to see Sod’s Law – a musical romp through queer history. I haven’t seen the show, but it sounds great! Catch it at the Mint Studio @ Infirmary Street.

“I’m better the second time around.”

WHAT: “Eight decades of music, madness and foreign affairs are scandalously revealed in this tantalizing new one-woman musical comedy cabaret; from femme fatale D’yan’s lusty adventures in 1950s Paris to her romantic swains in Italy, Austria, Jordan and the whole world. This feisty 82-year-old is still going strong with her pithy songs, witty stand-up, racy tales, yodelling, ukulele and piano-playing.”

Yes! And I’m so excited. I’ve traveled the world but I’ve never been to Scotland.

The show was inspired by my travels abroad over the last 40 years. I co-wrote A Broad Abroad! with Eric Kornfeld who is also the director The show has played to sold-out houses at the Frigid Festival and The Duplex in New York, and the Orlando Fringe Festival in last May. I’m not sure where we’re going after Edinburgh but I’d love to travel the world with the show.

They should come back and see me! I’m better the second time around. There’s also a lot of great shows at the Greenside Venue. I’m looking forward to seeing a lot of theatre while I’m in Edinburgh.