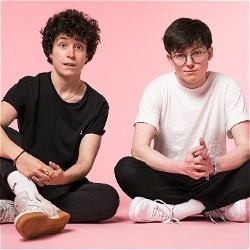 “Fringe is one of the only places you can get a really intensive, near deadly amount of stage time as a comedian, even if you’re new.”

WHAT: “Shelf are a musical comedy double act. Sort of. One of them is tone deaf, so technically they’re a musical single act plus guest. Hair is their highly anticipated debut hour about one bizarrely life-changing haircut. Over 1 million views on BBC Three. Founders of The LOL Word. Musical Comedy Awards finalists, 2020. Funny Women finalists, 2019. ‘Cool and relevant’ (Skinny). ‘Clever and catchy’ (Bruce Dessau). ‘The talented twosome find belly laughs in heavyweight topics like mental health, sexuality and gender’ (DIVA).”

No, we gained much of our performance experience on the Free Fringe! Fringe is one of the only places you can get a really intensive, near deadly amount of stage time as a comedian, even if you’re new. Or a little bit weird, and when we started out, we were both.

We’ve learned to adapt our style to musical comedy as that works best for us, and has made it much easier to gig on different bills than when we did sketch comedy. We’ve also learned that we should listen to scientists and be prepared for future pandemics or something (not totally clear on that, haven’t fully absorbed that last thing).

Our show Hair is a very fun, energetic stand up show / concept album about two completely different experiences of looking like handsome young boys. We wrote it ourselves and are forever indebted to our director, Phoebe Bourke who helped us mould it into the handsome production it is today. Our production company is called Berk’s Nest, and we love them dearly- they produce a lot of our favourite comedians.

Technically, we’ve had a version of this show in the works since 2018, but then there were global events. So far we know we’ll be taking it to Aberystwyth comedy festival, to extend its already long life.

Well, first you should come see The LOL Word, our queer mixed bill at the Monkey Barrel. It’s on all weekend form midnight to 3am, and it will be an absolute rager.