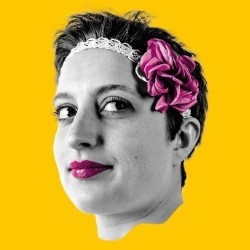 “Time really flies! Seems only yesterday I was standing like a baby tree on the Debating Hall stage… so wooden and nervous.”

WHAT: “In this historical feminist coming-of-age musical comedy show, Harriet brings forth a team of rebellious women from the history of science to help her wage battle against ignorance, patriarchy and her inner demons. She also looks back over her career as a performer, from school plays to now, presenting her achievements alongside those of renowned inventors, healers and technological pioneers. Bold move, idiot. Funny Women Award winner and So You Think You’re Funny? finalist, 2016. Buxton Fringe Comedy Award winner 2017. ‘Marvellous’ (Chortle.co.uk). ‘Her lyrics were truly inspired’ (Bruce Dessau). ‘Fairly niche’ (Stylist).”

This is my third time doing a solo hour in Edinburgh, but my seventh or eighth time at the Fringe! (I lived in Edinburgh for five years – you can’t escape it). Last year and the year before I did shows with the free fringe and I had an amazing time, the year before, which would be 2016, I was up doing the semi-final and then the final of the So You Think You’re Funny? competition. Time really flies! Seems only yesterday I was standing like a baby tree on the Debating Hall stage… so wooden and nervous. Now this year I’m back once again to reminisce about my student days in Edinburgh, thinking about all the very non-prestigious things that I did during term-time in these prestigious venues. I don’t have to imagine audiences naked because I’ve seen worse.

I’ve written and recorded another series of a great podcast with Bec Hill and Dr Lucy Rogers, called The DesignSpark Podcast, which I’m very proud of. I’ve also performed overseas for the first time, in Sweden and Belgium, which is awesome! I’d like to get booked somewhere hot next, though (please).

My show is a solo hour of musical comedy, I wrote it, it’s produced by Objectively Funny. We’re all pretty new to the collaborative process of creating a proper smasher of an Edinburgh show, but it’s great because I’ve got a wonderful group of people looking out for me, and I can focus on getting the show ready. I’m doing previews of the show all over the country, including four dates at Buxton Fringe (11-15 July), which has become an annual joy for me. I’m lucky enough to be taking this show to Lund Festival in Sweden after Edinburgh, and after that, who knows!

There are so many goodies to see at the Old Tolbooth Market (my venue buddies), including Isa Bonachera’s show about space, Archie Henderson’s show about jazz, Bad Aunts, a show about a group of older women who’ve gone totally rogue. Then there’s a few absolute titans of comedy like Rosie Jones, Jayde Adams and Sooz Kempner. And of course my podcast-mate Bec Hill whose show looks mad good. I never really see improv outside of the Fringe either so I’ll be having me some of that – Austentatious and Spontaneous Potter are top of that list. Then there’s my favourite theatre people too – Xnthony’s Confirmation is a must-see, and, for the pretentious arty kids out there like me, anything and everything at Summerhall.