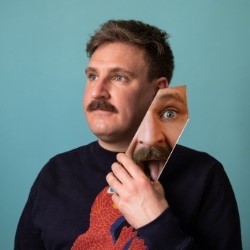 “I also learned that I love video calls. Not Zoom. I mean Face-timing or whatever the WhatsApp equivalent is. I hate talking on the phone, it makes me anxious. But I love a video call.”

WHAT: “Ali Brice is embracing life after almost losing it. Three years on, he’s admitted defeat and is back on his feet and trying again. Through therapy, friends and… sausages, he’s living in the moment and celebrating the little things life has to offer. A sincere, heartfelt and happy show, expect silly stories, big questions, and jokes aplenty from a ridiculous man with a stupid moustache. ‘World’s most naturally funny person’ (Joz Norris). ‘A hidden gem’ (Skinny). ‘Side-splittingly comical’ (TheUpcoming.co.uk). ‘Joyously bonkers’ (Chortle.co.uk). As seen/heard on BBC and Channel 4.”

This is my 11th time and the Fringe. I love it. Each year I say, ‘This will probably be my last’ and then I always end up going the next year. I can’t stay away.

It’s my favourite time of the year. I always put it this way. For 11 months of the year, conversation is dominated by football. It’s used a shortcut to get to know someone. I don’t like football. However, at the Fringe, football is replaced by comedy. And I love comedy.

Basically, for 1 month each year I get to live in a world where my favourite thing is the main conversational currency and I feel at home. On top of that, I get to do the thing I love every day for a month. And on top of that, all my friends go as well. What could be better than that?

Over the last 10 years I have seen the Fringe grow and become too big (although that does just mean more comedians, really, and I kind of like that!), I’ve seen people become stars, people have a tough time, I’ve laugh, cried, been frustrated, made friends, fallen in love…. it’s been a real rollercoaster. But the one thing I have learned is that you have just got to have fun. Nothing else matters. Just enjoy yourself.

This will probably be the last time I go.

I spent my lockdown doing therapy. Not intentionally, it was just coincidence. And a very happy one. I spent two years working through some stuff and really getting to know myself for the first time. It was hard work, really tough at times, but is 100% one of the best things I have ever done.

So, I have learned a lot about myself.

I also learned that I love video calls. Not Zoom. I mean Face-timing or whatever the WhatsApp equivalent is. I hate talking on the phone, it makes me anxious. But I love a video call.

I guess my wider point there is, I have learnt that connection is key. It’s good to talk.

My show is about a very dark moment in my life in 2018 when I tried to end it all. But it is funny.

I wrote it. Jonny Freeman directed it. I met him in Madrid while he was pretending to be an alpaca. True story.

I performed the very first outing of the material in August 2021.- just to see if I could talk about it and make it funny. So, it’s been a long journey and the hardest I have ever worked on a show.

I have performed it work-in-progress versions of it around the UK over the last year and taken it to a few comedy festivals (Leicester, Machynlleth, Brighton, Cambridge), but Edinburgh is the first place it will be performed in its finished form. I can’t wait.

I hope to perform it again after the Fringe. Plans are afoot!

Alwin Solanky tells the story of growing up as one of the only Gujarati speaking refugee families in a small town. It is beautiful.

Consignia – the most consistently bizarre, original, weird, and committed-to-doing-their-own-thing group of performers I have seen. They deserve bigger crowds go see them.

Joz Norris’ shows get better and better each year. I am in awe of his approach to comedy and very jealous of his talent.

Sooz Kempner is awesome. I did my last preview with her and her show is great – she has an amazing bit about Grease that is just laugh out loud hilarious.

Eleanor Morton is going to be star, see her while you still can.

Christian Brighty used to flyer for me for free back in the day and now he has over 400,000 followers on TikTok and has a brilliantly stupid show about the greatest love story ever.

Luke Rollason is original, hilarious, and wonderful watch – do the right thing and go and see him.

Rosie Holt – you can’t see her because all her shows are sold out, but she is an excellent character comedian and satirist. Do what you can to get a ticket.

Ania Magliano – I gigged with her recently and she blew my socks off, just excellent jokes.

Sam Nicoresti is unique and hilarious as is his show, which is all about self-explorations and cancel culture go see it.

Jordan Brookes is the current reigning champion of comedy, of course you should see him.

John Kearns is the best comedian of his generation; he will go down in the history books as true original.

Pat Cahill is one of the most naturally funny people in the world, a beautiful idiot.

Ben Moor is funny, clever, philosophical, life-affirming and one of the nicest people you could ever hope to meet.