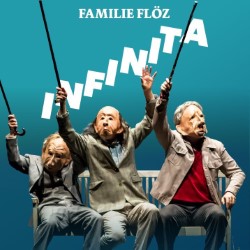 “Since 2001 we have then performed in 32 different countries, some 150 performances a year…”

WHAT: “After sell-out success of Hotel Paradiso and a five-star hit with Teatro Delusio, Germany’s mask theatre masters return to the Fringe with their next brilliant, visual comedy. In Infinita, a cast of irresistible, larger than life characters are seen both as warring children and as residents of an old people’s home. The wily games of nursery one-upmanship seem hardly to change with the passage of time. Survival of the craftiest is still the rule of the day. Infinita plays out in a succession of increasingly hilarious scenes, combining poignancy, astute observation and some superbly skilled slapstick.”

WHERE: Pleasance Courtyard – The Grand (Venue 33)

The international success. We arrived in Edinburgh in 2001 being and unknown German company. Right after we started receiving calls from all over the places. Since 2001 we have then performed in 32 different countries, some 150 performances a year…

It is one of our best shows W have been performing INFINITA for 10 years now, but it is the first time that comes to Edinburgh. As all the other productions by Familie Floez is a collective creative process where all the actors participates and there is a director, an external eye so to speak, which coordinate all comes out from our improvisation. INFINITA is the third production of a company who came together in 1996 at the Folkwang Schule in Essen, at the time lead by Pina Bausch. We started in 4 people, we are now over 40, with 4 different companies touring at the same time 4 different productions.

We love to visit the circus hub, or any of the international or circus shows… so many talented friends in the program!!!! Portrait in Motion for instance is a pearl!!!!