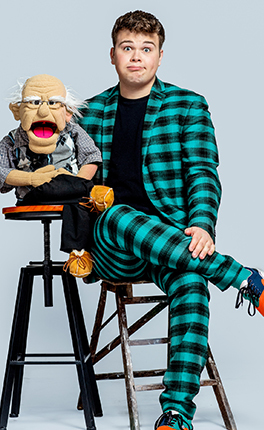 “To be in the lovely Quarry Theatre with a room full of people and sharing laughs was very special.”

WHAT: “When Max’s parents bought their nine-year-old son a puppet for Christmas they were not expecting him to become a full-time ventriloquist!

Returning after his successful show in 2021, Max Fulham brings his hilarious show combining stand-up and skilful ventriloquism to Bedfringe 2022. With television appearances including ITV’s ‘Game Of Talents’ and viral success on TikTok, Max brings the traditional art of ventriloquism bang up to date.”

This is my second time at BedFringe after performing there last year. I had a really great time and it was one of those magical shows that survived amongst pandemic chaos. To be in the lovely Quarry Theatre with a room full of people and sharing laughs was very special. Really looking forward to coming back this year with some brand new things and maybe a puppet debut or two. Oh did I mention I’m a ventriloquist? Should probably have given that context earlier otherwise you would have thought I’m just some guy with puppets… suppose I am that too though- but in a funny comedy way, not a lonely, are-they-replacements-for-real-friends kind of way!

It has been a busy year so far performing everywhere from comedy clubs to cruise ships! There was one week of gigging recently where I clocked up over 1500 miles in my car (which is more than the Proclaimers covered on foot). I’ve also been busy creating #content for social media too. It’s very fun firing out my silly videos into the internet for people to enjoy. This year I also performed my first solo show in London’s West End, but that’s just showing off now!

My show is what happens when old-school variety meets modern-day stand-up. Some people switch off when they hear ventriloquism but cast your Summertime Special and creepy dummy thoughts aside and come along as I introduce you to my various puppet characters, including my own Grandad, and we will have a great laugh.

I wish I was around for more of the BedFringe!! There are so many good shows on! I would love to see Katie Pritchard with her show Disco Ball on 24th as I am yet to see her perform live but love the clips I have seen online. I’d also love to see The First Broadcast: The Battle for the Beeb in 1922 by the superb Paul Kerensa. And thirdly, because three is a neat number, I would definitely go and see ‘Charlie Russell Aims To Please’ as I am such a huge fan of Mischief Theatre’s work.