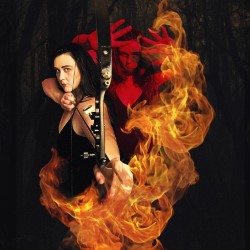 “Nothing gets people talking to you like standing in a bin.”

WHO: Phoebe Angeni: Author and performer

WHAT: “It’s not all in your head. Fantasy and reality merge in this autobiographical one-woman adaptation of Homer’s Odyssey. Dynamic, dramatic and at times darkly comedic, Ithaca explores the journey of Nobody, a feminine aspect of Odysseus, who was born in the Cyclops’ cave. Nobody’s journey is about finding home, but also creating space and a voice for herself within a world and body, which seem to forcefully reject her. Ithaca is a stage-for-screen production examining crucial social issues (fatphobia, bullying, domestic harassment, mental health, chronic illness, and immigration) and features physical theatre, devised movement, poetry and some special effects.”

This will be my third year performing at the Edinburgh Fringe! I was lucky enough to be at the festival in 2018 and 2019 and both years were absolutely incredible. My first year at the Fringe was wild and overwhelming – the sheer vibrancy of people coming in from all around the world to share their creativity was amazing to experience. I feel like I got more of the lay of the land in 2019 and I was also more involved with show marketing.

As part of The Greenhouse I did reverse-flyering shifts just about every day standing in bins on the Royal Mile to chat with folks about sustainable theatre practices. Nothing gets people talking to you like standing in a bin and it was a fantastic way to meet audience members, fellow performers, and feel the pulse of the city. This year has been a much different experience as a completely one-woman production. I’ve definitely been honoured to help directors carry their visions to the festival, but there’s something extra special about sharing a project that’s entirely my own.

Since the start of the pandemic in 2019 I’ve learned so much – not only how to execute every single element of stage-to-screen production, but how to rely on myself and have more confidence in my creative choices and intuition.

My show, Ithaca, is an autobiographical one-woman adaptation of Homer’s Odyssey. I’ve always wanted to create a show inspired by the Odyssey and when I was furloughed at the start of the pandemic I decided there was no better time to throw myself into this project. It’s definitely been a difficult process because throughout the past year and a half I’ve been separated from my creative community while living in San Francisco. After remotely work-shopping my script with some fellow artists back in the UK I reached out to local theatres in San Francisco to get the show on its feet. Theatres were pretty much shuttered, so I never heard back. It was so important to me to be able to finally tell my story and I didn’t have the budget to hire help, so I decided to do everything myself. Throughout the course of the pandemic I produced the show. I set up a voiceover studio, recorded and edited each of my 14 character’s voices, sourced and adapted a soundtrack, directed myself by watching playbacks of my rehearsals, and I devised and choreographed each poetic piece. Finally I set up cameras, filmed Ithaca scene by scene in a 16 square foot space, and edited the entire show.

While watching other recorded shows throughout the pandemic I noticed that I often felt distant from the energy I usually feel in a theatre. Since the pandemic, a lot of familiar experiences have seemed distant and with Ithaca I wanted to help bridge this divide. I have some experience with film poetry, so I thought to incorporate experimental effects to enhance a digital experience and immerse viewers further into the play – to create empathetic connections and push the boundary between virtual and physical performance space. Ithaca draws heavily from Homer’s Odyssey both in structure and theme, which luckily fairly easily mirrors or complements my life story. You don’t have to have read the Odyssey to understand Ithaca – its themes, such as defining a relationship to selfhood and home, are universal concepts and the social issues that Ithaca addresses are widespread and important for all viewers to consider.

Sally Charlton’s Mother’s Milk sounds salacious, poignant, fun, and also powerful (and I’m in love with the idea of abstract expressionist-like usage of milk on stage). Disaster Plan’s Move also sounds like my absolute cup of tea. If you can go in person, do it! The beach, feminine community, Gaelic songs with an international outlook – what’s not to love??