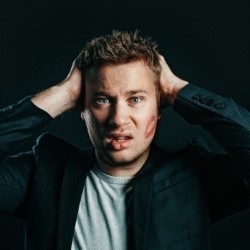 “I never thought I’d get married and technically it’s still illegal in the majority of countries. Gays getting married is kinda punk rock if you’re in Russia or Saudi Arabia, so it makes me feel so edgy.”

WHAT: “They say a loose pair of lips could sink a ship, but you’ve gotta talk truth to give reality a flip. And reality in 2018 needs the hard word, so there’s never been a better time to get lippy. Reading Comedy Festival New Act of the Year and 2018 NATYS Finalist Jake Howie doesn’t pay lip service – there’s no time for niceties when the world is drowning in disillusion. Join him as he takes you on a journey through the lens of an eternal optimist trying to grapple with this wild moment in time.”

WHERE: Just the Tonic at The Caves – Just the Wee One (Venue 88)

YES! I am popping my Edinburgh cherry after a few years of doing comedy. I feel like I may be the first married gay man from New Zealand who grew up in the church of Scientology and whose greatest inspiration is Nicki Minaj debuting at the Fringe? But then again, it’s the wild and wacky Edinburgh Fringe so maybe not…

I GOT MARRIED. That’s big news because I don’t believe in marriage, I never thought I’d get married and technically it’s still illegal in the majority of countries. Gays getting married is kinda punk rock if you’re in Russia or Saudi Arabia, so it makes me feel so edgy.

I am a relentlessly positive Kiwi who believes in the good of people living in a time where the good of people is questionable and relentless positivity is impossible. I wrote and produced Read My Lips to get lippy, to give the hard word and to mouth off on all of the wild contradictions of the world. There’s also some bum jokes – LOL. And you will leave feeling so happy, and I won’t lecture you on Trump – YAWN.

I will be seeing Esther Manito and Ryan Dalton’s Angry Emoji Face, Jenny Collier’s A Few Good Jen, Yuriko Kotani’s Moreish, The Ballad of Sarah Callaghan and all the LGBT+ shows I can possibly see!