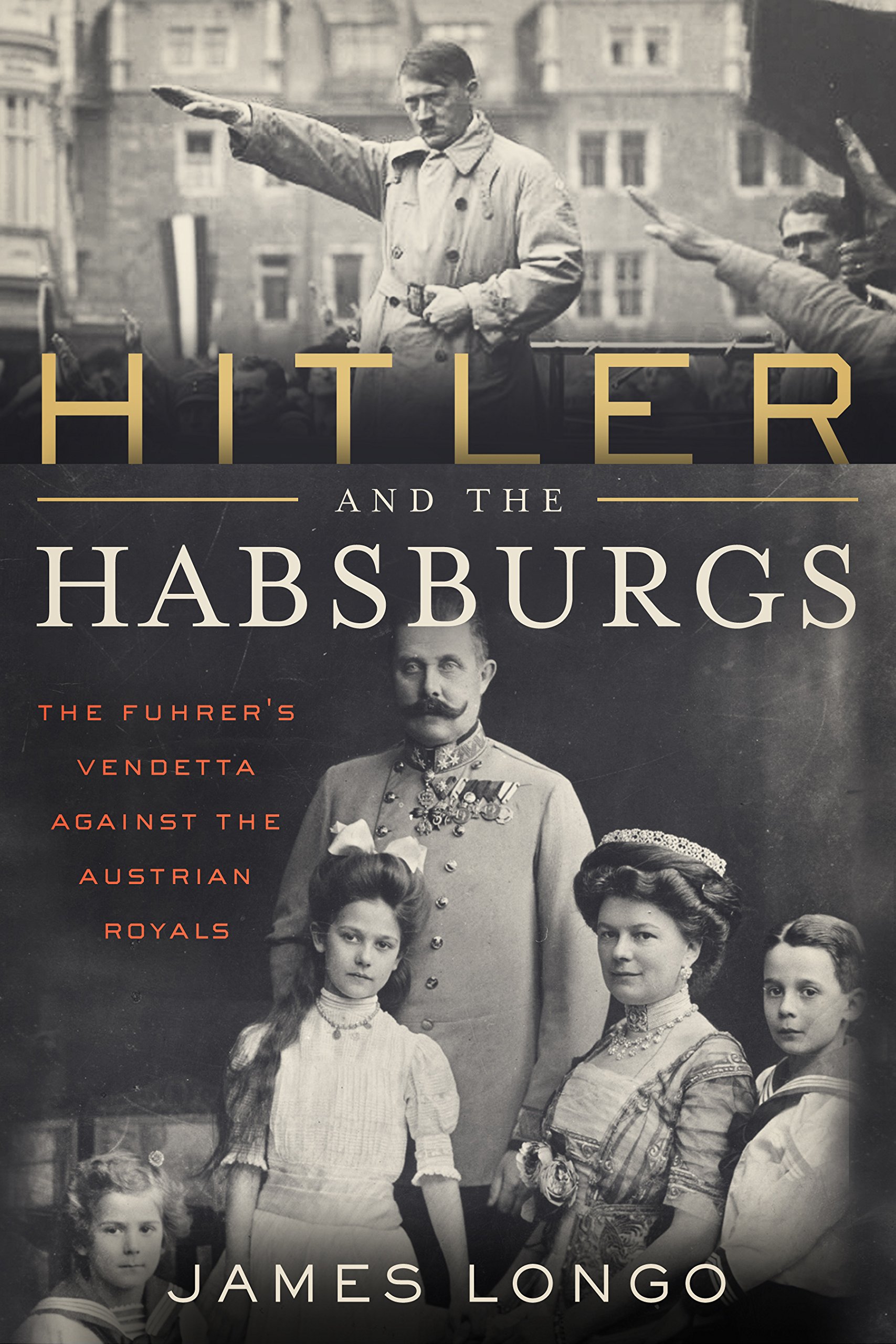 “Franz Ferdinand was a firm believer in peace, religious tolerance, and European unity.”

WHAT: A stunning work of narrative history revealing how and why Adolf Hitler targeted the children of the assassinated Archduke Franz Ferdinand, making the Archduke’s sons the first two Austrians deported to the Dachau concentration camp, and how the family fought back.

Five youthful years in Vienna. It was then and there that Adolf Hitler’s obsession with the Habsburg Imperial family became the catalyst for his vendetta against a vanished empire, a dead archduke, and his royal orphans. That hatred drove Hitler’s rise to power and led directly to the tragedy of the Second World War and the Holocaust.

The royal orphans of Archduke Franz Ferdinand-offspring of an upstairs-downstairs marriage that scandalized the tradition-bound Habsburg Empire-came to personify to Adolf Hitler, and others, all that was wrong about modernity, the twentieth century, and the Habsburg’s multi-ethnic, multi-cultural Austro-Hungarian Empire. They were outsiders in the greatest family of royal insiders in Europe, which put them on a collision course with Adolf Hitler.

As he rose to power Hitler’s hatred toward the Habsburgs and their diverse empire fixated on Franz Ferdinand’s sons, who became outspoken critics and opponents of the Nazi party and its racist ideology. When Germany seized Austria in 1938, they were the first two Austrians arrested by the Gestapo, deported to Germany, and sent to Dachau. Within hours they went from palace to prison. The women in the family, including the Archduke’s only daughter Princess Sophie Hohenberg, declared their own war on Hitler. Their tenacity and personal courage in the face of betrayal, treachery, torture, and starvation sustained the family during the war and in the traumatic years that followed.

Through a decade of research and interviews with the descendants of the royal Habsburgs, scholar James Longo explores the roots of Hitler’s determination to destroy the family of the dead Archduke. And he uncovers the family members’ courageous fight against the Führer.

WHO: James McMurtry Longo is a native of St. Louis, where he was educated and taught in public schools for over a decade. He graduated from the University of Missouri – St. Louis, then earned his Master’s degree from Webster University and his doctorate from Harvard University. He is an award-winning professor and chair of the Department of Education at Washington & Jefferson College in Washington, Pennsylvania.

As a Fulbright Scholar, James served as the Distinguished Chair of the University Centre for Women’s Studies and Gender Studies at Alpen-Adria-Universität Klagenfurt in Austria. He has taught in Austria, Brazil, and Costa Rica, and lectured at Harvard, Oxford, Napier University in Edinburgh, Zlin University in the Czech Republic, and throughout the United States.

James has written eight books. When not teaching or writing, he would rather be in a canoe than any other place on earth. He lives in Washington, Pennsylvania, and spends his summers in Suttons Bay, Michigan.

Why Hitler and the Hapsburgs?

Adolf Hitler had an enemies list of over 7,000 names he wanted arrested when the German army entered Austria in March of 1938. At the top of that list were the two sons of Archduke Franz Ferdinand whose 1914 assassination triggered the First World War. The Archduke’s sons were the first two Austrians arrested by the Gestapo, imprisoned in Vienna, and deported to Dachau. Why? Hitler’s hatred of them, and what the Habsburgs represented to him fueled the escalating events that led to the Second World War, the Holocaust, and the death of millions. Hitler and the Habsburgs is one of the great untold stories of the twentieth century. It tells the story of Hitler’s obsession with one remarkable family and their struggle to survive.

Archduke Franz Ferdinand of Austria gets a very positive press in your narrative. Was he anything more than another uniformed aristo in a feathery hat?

Franz Ferdinand is one of the most misunderstood, maligned, underrated men in history. Despite the Archduke’ prickly personality, Hungarian Bishop Joseph Lanyi described him as “the indispensable man, the catalyst for European peace and unity.” The remarkable group of diverse advisors and peace advocates he gathered around him as his advisors agreed.

So too did the English Duke of Portland who wrote of Franz Ferdinand’s assassination on the eve of the Second World War, “It was criminal and tragic in its senselessness. How desperately sad it is that England would never witness the ascension to the throne of this great Habsburg prince. Would it not have been an immense advantage today of there was an entire strong and peaceful power in the Danubian basin? This noble prince was also a true European and what we see now when it is too late – he saw at the time. In justice to his memory – one must admit how much would have been different had he lived.” Winston Churchill agreed. So too did Adolf Hitler. He saw the Archduke and the multi-cultural Habsburg empire he represented as the major roadblock to “Rassenkrieg” the apocalyptic race war pitting ethnic groups against each other he planned.

Would a great European and world conflict have happened had Franz Ferdinand lived?

Many historians today believe had Franz Ferdinand lived a great European and world conflict, especially in 1914, would never have happened. The Habsburg Emperor Franz Joseph did not want war. His heir Franz Ferdinand, was even more determined to prevent war declaring, “External peace for us…that is my profession of faith, for which I will work and struggle as long as I live!” One court observer wrote at the time of his assassination, “Hardly was he in his coffin before all his protégés, all his creatures, friends, and officials were swept out of posts and office. The court cliques and military lords who had been continuously harassed by the Heir to the Throne saw to this being a clean sweep.” The death of the Archduke crushed the peace party. Austria’s war hawks wasted no time in using his assassination as an excuse to fight the war he spent his entire adult life trying to prevent.

You’ve got a time machine and a licence to alter one event in the period you cover. What are you changing and why?

If I could have altered one event in the historic period covered by my book it would have allowed Franz Ferdinand to succeed to the Habsburg throne. He was a firm believer in peace, religious tolerance, and European unity. Winston Churchill wrote the First World War and the fall of the Habsburg empire, “gave the opening for the Hitlerite monster to crawl out of its sewer onto the vacant thrones.”

What surprised you most during your research?

The biggest surprise in my research was the obsessive hatred Adolf Hitler had toward the Habsburgs and the nearly invisible, vital role the women in Franz Ferdinand’s family played in saving their husbands, brothers, and children. Their courage, resilience, religious faith, and remarkable sense of humor was inspiring.

Did you have any support or input from Franz Ferdinand’s family and descendants?

Franz Ferdinand’s great-granddaughters, great-grandson, and two of his grandsons generously spent many hours with me, sharing stories, family photos, and reminiscences most of which had never been shared with other authors. This was invaluable to me in my research and writing.

If you could ask Franz Ferdinand one question, what would it be?

If I could ask Franz Ferdinand one question it would his private thoughts about the mysterious death of his cousin Crown Prince Rudolph. But of course, the reticent Archduke wouldn’t discuss such thoughts with me, or anyone else.

Ignorant people like me are only familiar with Stefan Zweig from Wes Anderson’s ‘The Grand Budapest Hotel’ (2014). Where should we go next to learn more about his life and literary legacy?

I was happy Wes Anderson saluted Stefan Zweig in his movie ‘The Grand Budapest Hotel.’ Zweig was Austria’s most famous, best-selling novelist in the first part of the twentieth century, and as such was a contemporary of Franz Ferdinand and his family. His writing was popular throughout Central Europe, the United States, and South America. He was an astute observer of the imperial Habsburg capital of Vienna, and the unique role the Austro-Hungarian empire played in European society and culture. Zweig’s books provide a genuine sense of a vanished time and place and are worth a read. The World of Yesterday finished two days before his suicide, was written when Adolf Hitler’s power was at its zenith. It is a haunting testimony to Zweig’s life and legacy.

Historians are reluctant to draw overly close parallels between then and now, but what is the most important lesson you hope readers will take from your book?

Adolf Hitler is not dead. Echoes of his racism, anti-Semitism, and blinding nationalism are everywhere. Stefan Zweig’s prophetic words from The World of Yesterday are worth repeating. “Its red hue was really the firelight of the approaching conflagration.” We all have a responsibility to recognize the danger of extremism and speak out against it. As Sue Woolmans co-author of ‘The Assassination of the Archduke, Sarajevo 1914 and the Murder That Changed the World’ wrote of Hitler and the Habsburgs, “We need books like this one to remind us of the black hole of terror into which we can so easily plunge.”

I am currently working on a memoir of a remarkable woman peacemaker.