Casanova is a brand new ballet on its world premier tour, choreographed by Kenneth Tindall in his first major work. This could have gone either way but be reassured: this is a really exciting piece.

The story itself is based upon the life of Giacomo Casanova, taken from Ian Kelly’s biography of Casanova. It starts with Casanova (Giuliano Contadini), a trainee priest, intent upon following his vocation when he meets musicians the Savorgnan Sisters, Nanetta & Marta (Abigail Prudames and Minju Kang). Together the sisters seduce the young priest and take his virginity. Upon discovery, Casanova is cast out of the seminary with only his violin and a book: a forbidden text given to him by Father Balbi (Jeremy Curnier), a renegade priest who, being hunted by Inquisition, offloads the book on to the young man.

What follows is a story of the rise and fall of Casanova, first in his native Venice and afterwards again in Paris after being forced to flee by the Inquisition. Casanova takes himself seriously: he is an intellectual, a mathematician and a social climber. Ultimately though it is a story of talent wasted through dissipation and through that, he loses the women who loved him and whom he loves in turn: Henriette (Hannah Bateman) and Manon Balletti (Ayami Miyata).

In the central role of Casanova, Contadini (almost literally) carries the entire production. This is an incredibly demanding performance, having to show a wide range of emotions, the intellectual acuity, the boredom of unending lust and upmost despair to the brink of self destruction. Contadini is a good choice: the proportions of his Italian frame adds a level of authenticity to the production. The role itself is incredibly physical, one of the toughest I have seen for a male dancer, so it is with little wonder that there was just the slightest sign of fatigue by the end. As Henriette, Bateman’s performance is very moving and, as the nun M.M., Ailen Ramos Betancourt is extremely seductive. The cast delivered their roles wonderfully in a fabulous ensemble performance. Casanova should be sexy and frankly this lot are sex-on-a-stick. Christopher Oram (Costume and Set design) really delivers on this point: creating dance costumes that invoked the 18th. Century while being as revealing as a Berlin cabaret. His set is extremely versatile, which along with the change in lighting (Alastair West) allows the action to be set in the grandeur of Venice, in the glitter of Paris and down in the dungeons of the Inquisition. 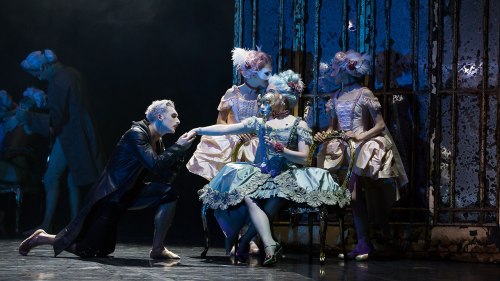 The whole production is driven, almost relentlessly, by the score written by Kerry Muzzey. Again the music is modern while being true to the roots of the period. For this writer it brought back memories Michael Nyman’s music for the film The Cook, The Thief, His Wife and Her Lover (1989). The music certainly is cinematic in quality, which is reasonable given this is Muzzey’s background. One audience member was heard to say afterwards “You could have watched that blind. The music!” Tindall is reported as saying that he approached Muzzey to create the music because neither of them have had the experience of creating a major production for ballet before. It shows, but not in a bad way. If one is used more to the Russian style, the choreography perhaps lacks the ostentation and even some of the elegance in comparison. However, the audience is instead offered something a lot more visceral and more approachable. During the interval I met a friend in the audience who had never seen a ballet before. Her eyes were glowing as she said “It is sooo awesome!”

In Casanova, Tindall has created a new ballet which is quickly going to be accepted as a modern classic.

Go to Casanova at the Festival Theatre and to Northern Ballet