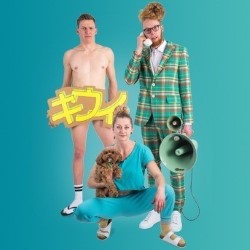 “This is our first time over here and we couldn’t be more excited to be part of this Festival of epic proportions.”

WHAT: “New Zealand’s favourite surreal sketch circus troupe bring their smash hit to Edinburgh. A wonderfully bizarre and thoroughly entertaining masterpiece, you will never predict what’s coming next! After sell-out shows across Australia and Canada, this unique style of comedy is set to shake up the UK. This show is innovative… and refreshingly unpretentious. ‘Fall-down funny, and absolutely top shelf’ ***** (Advertiser, Adelaide). ‘Hilarious and impressive in equal measure’ ***** (TheUpsideNews.com). Winner of Best Circus and Physical Theatre at Adelaide Weekly Fringe Awards 2019.”

Yes! This is our first time over here and we couldn’t be more excited to be part of this Festival of epic proportions. It’s been on our radar for years, 2019 felt like the right time to make it a reality!

In the past year Laser Kiwi has taken NZ and Australia by storm, winning awards, standing ovations, the works. It’s so encouraging to see audiences enjoy our show, we’ve had such a fantastic year.

The three performers you see on stage.. we are the whole crew! We wright, create, perform and produce the entire beast that is, ‘Laser Kiwi.’

We all grew up in Wellington, New Zealand, we actually met each other as young teenagers, all part of the local circus scene. After growing up, getting degrees and working professionally as solo performers we created our first production together in 2014, a colourful and absurd street show and have continued creating together ever since.

Laser Kiwi is a circus sketch show, a compilation of concepts/ideas we had scribbled in notebooks presented one after the other. Some are 8 minute pieces which have had weeks of rehearsal, some are 10 second whirlwind sketches which we literally threw onstage and hoped for the best (they’re all beautiful in our eyes). Needless to say, any idea we have these days goes straight in our notebooks/phone memos, in preparation for ‘Laser Kiwi #2.’

Spoiler alert, Zane and Degge are actually brothers, and Imogen and Zane are partners. It’s a tight-knit touring trio, and it works really well, we’re taking our family with us wherever we go.

This is our first time here at Edinburgh Fringe, and we can see why you’re asking this, it’s overwhelming.. in a good way! Hmm

Keep your eyes peeled for Thom Monkton.
Abandoman is brilliant and hilarious! Could watch this every night.

Go see our badass Aussie circus friends! Among other shows: Yuck Circus, the incredible Gravity and Other Myths creation – Backbone.

Also, a Wellington local company is bringing their fab show: ‘Back of the Bus’ by Java Dance Theatre. Check it out!