For me, with the May general election in mind, this is a timely production of Lord of the Flies: a charismatic, commanding and fear-mongering leader on one side; a righteous and idealistic leader who is unable to win mass support on the other; and one guy in the middle who doesn’t fit into either camp and who is killed off. I wonder if William Golding knew back then how important and relevant his book would still be 61 years after its publication. And that’s without postulating that Michael Gove might make a ‘good’ Beast. This Regent’s Park Theatre production certainly doesn’t shy away from the issues – it’s big, bold and gutsy, but in my opinion, tries too hard to make its point.

I must start with Jon Bausor’s design – the first thing you see on entering the auditorium. It’s visually spectacular, with the focal point being a very believable carcass of a crashed aeroplane to one side, strewn with suitcases. On the other a sizable ramp leads up and off, and everything is surrounded by trees and hanging branches in Naturalistic style. Yet while stunning, I felt the set ended up being too much of a dominating presence, causing unnecessary overlaps with different scenes occurring concurrently (and confusingly) in the same part of the stage. I would have preferred a more mapped-out use of the space to clearly define the different locations in the story and help distinguish the separateness inherent in the characters.

One of this production’s strengths was the energy and dynamism with which the warrior-like sections were portrayed. With frantic movement, chanting, and a commanding performance from Freddie Watkins as ringleader Jack, these moments were terrifying and powerful, and an effective glimpse into what a group of boys might turn into without effective parenting. Indeed, this interpretation puts Jack’s character front and centre (rather than Ralph’s), giving more focus to the brutality of the boys’ behaviour throughout.

However, some of the effectiveness of the “savagery” was lost given a distinct lack of contrasting moments of quietness and subtlety. I found the whole thing too unnecessarily shouty: Piggy and Ralph would communicate in raised and pained voices when alone. Commands were all aggressive, and fright seemed to always be expressed very loudly. Even the Officer shouted all of his lines, reducing his status to that of the children, when his presence could have been communicated far more effectively through physicality and control. 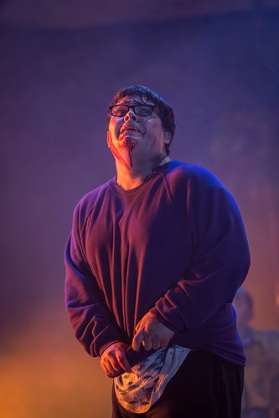 In saying that, there were occasions where the dynamic changed to great effect: early in the second act when Ralph and Piggy discuss how to get Piggy’s glasses back is a rare glimpse of depth and subtlety in performance style, allowing the audience to connect with these two as different from the others. It’s a shame this technique wasn’t used more in the first half of the production. Anthony Roberts gave a valiant performance as Piggy, and I would have liked to have seen more of him.

The sound and lighting were both excellent in supporting the action and setting the scene, and the occasional music added to the ambience without being overpowering. The evolution, down the way, in costume and makeup to underline each character’s descent into savagery was clever and effective. That all went to show that clearly a lot of thought and creative energy has been put into this production, but for me a couple of big flaws hold it back from being remarkable.

Go to ‘Lord of the Flies’ at the Festival Theatre