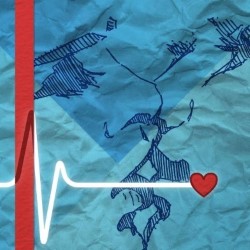 “As far as filling the Fringe’s brief to provide a platform for new companies, we’re ticking all the boxes.”

WHAT: “For the romantic, the cynic, and the sick of heart – Love/Sick is a play about the kind of love you won’t find in fairy tales. Dark, funny and heartbreaking in equal measure, happy endings are far from guaranteed. John Cariani’s collected short plays sharply cut across the full spectrum of romantic relationships, from young love to old flames. There’s no sterile, airbrushed prince and princess here – Love/Sick is about flawed, messy people with problems they can’t always solve, but who will fight like hell to make it work anyway.”

I’ve been coming to Edinburgh to see the Fringe for years, but my first time involved in a show. In fact, this is our company’s first time bringing a show to the Fringe, as we’re very new, and every member of the cast and crew is a newbie too! So as far as filling the Fringe’s brief to provide a platform for new companies, we’re ticking all the boxes.

So I think our story as a company really started at the very beginning of this year, when we first pitched Love/Sick to theatres in Oxford. After that, we decided at the last moment that we didn’t want to wait another year to take a show to the Fringe, and got in contact with the Space UK team. They were fantastic, and having had full houses and good reviews throughout our run in Oxford, most of the original cast and crew have put a huge amount of effort into making sure that this version of Love/Sick is even better. So all in all, deciding to start a company and do Love/Sick is pretty big for us, but honestly the last few months have been so full on and so much fun it’s hard to pin one moment down.

Love/Sick was written by John Cariani, an American playwright, but this particular production came together originally as myself and my co-director Olivia, who is also performing in this production, discussed what we felt was missing from student theatre. Something to balance the sketch shows/stand up fare that British universities are so fond of, and the often overly niche and slow-paced theatre that student companies (at least in Oxford) often produced. So we settled on something fast, with 7 short plays that pull you from silliness to sadness in a comic but often unsettlingly dark take on romance.

Because we have a case of 4 playing 14 different roles, because the show is only 55 minutes long and tries to develop 7 snapshots of often very different relationships, boredom just isn’t really an option. Our Oxford run was both a lot of fun and a big success – we sold really well, and reviews were really positive. But even though we have retained most of the original cast, we’ve been rehearsing so the Edinburgh show to be tighter and funnier than the Oxford run, so we’re all really excited to see how it unfolds throughout the Fringe. We don’t have any plans to take this show beyond the Fringe, but who knows!

I would love our audience to go see more student theatre and comedy – The Free Footlights Shows are always good fun and offer a really wide range of student stand up, and I know a lot of really excellent student theatre is travelling to the Fringe this year, like the musical ‘Rust’ which is being put on by students from Cambridge. I also know that Almost, Maine, another Cariani play, is being put on this August, so if our audience have a good time at Love/Sick they should certainly check that out too!