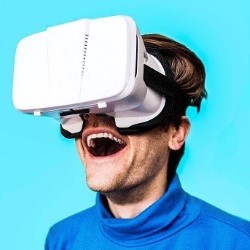 “I was cast in a Christmas advert for [well-known clothing brand], and I was flown out to Bulgaria where I was pretty much abandoned, baffled and sleep-deprived, outside my hotel. I wandered around Sophia (the capital of Bulgaria – thanks Google!) for two days, with no idea of when the nightmare would end.”

WHAT: “Switch on your phones and switch off your brains, as one idiot enters the cloud and puts his mind on a spin cycle for your entertainment. Welcome to a slapstick Black Mirror that is guaranteed to make us all mutual friends. Viral nonsense from the ‘amazingly entertaining’ ***** (EdFestMag.com) celebrity internet nonentity Luke Rollason. Unlimited calls and texts and time and space and hope and everybody wins an iPad. ‘Made me cry with laughter’ **** (BroadwayBaby.com). ‘Hugely entertaining’ (Chortle.co.uk).”

My history with the Edinburgh Fringe is a case study in trial-and-error. I’ve been in children’s theatre (played the role of “table”, was upstaged by giant elephant puppet), experimental physical theatre (upstaged by talking vagina puppet), musicals about political philosophy (upstaged by complex ideas), and last year I performed by debut solo show, which was a one-man David Attenborough nature documentary (upstaged by my technician’s poor Attenborough impersonation).

I was cast in a Christmas advert for [well-known clothing brand], and I was flown out to Bulgaria where I was pretty much abandoned, baffled and sleep-deprived, outside my hotel. I wandered around Sophia (the capital of Bulgaria – thanks Google!) for two days, with no idea of when the nightmare would end. Then I was taken to set where I was told, after four hours of waiting, that I had been cut because it took too long to get the actor who played the role of the Christmas Stocking in and out of his costume. But to be fair, he’d been to drama school, and I hadn’t. This complete non-experience was probably instrumental in my decision to make a show about advertising.

My show is a one-man physical comedy show where I attempt to recreate the experience of your brain when you go online. As a result, my show is confusing, distracting, full of unfinished thoughts and (according to my press release!) addictive. My hope is people come back again and again, just to see if they missed something (they haven’t). It’s also super stupid, but has moments where something real and ‘human’ and that involves to connecting with people happens in the room. As part of all the manic chaos, quite a lot is asked of one audience member and the entire show totally hangs on the bond of uncertain trust we’ve built together. It’s an incredibly ambitious hour of high-concept comedy.

Straight after my show, people should go see some nature. Turn off their phones and head out onto the meadows or that park next to the train station. Take a bit of digital detox. At the very least, stick their heads in a pot plant. Then, if they are SURE they wanted to consume even more content, they should go and see Lucy Pearman’s new show Baggage, who is also at the Monkey Barrel. There are loads of excellent idiots at the Monkey Barrel – Josh Glanc and Pat Cahill are other favourites of mine. Then go check out the Heroes line up – like the Monkey Barrel, these are all excellent comedians doing Pay What You Want Shows (and unlike the rest of the Fringe, they’ll actually make money from doing them!). I don’t want to just list names, but it would be a real shame to miss Ali Brice’s new show in a bin, Bin Wondering. Finally, go see Privates: A Sperm Odyssey at 5.20pm at Heroes @ Boteco. It’s about sperm, and I’m in it, playing a sperm.